The line, which is a critical part of the city's east-west connectivity, will be operated from next week with strict anti-Covid standard operating procedure 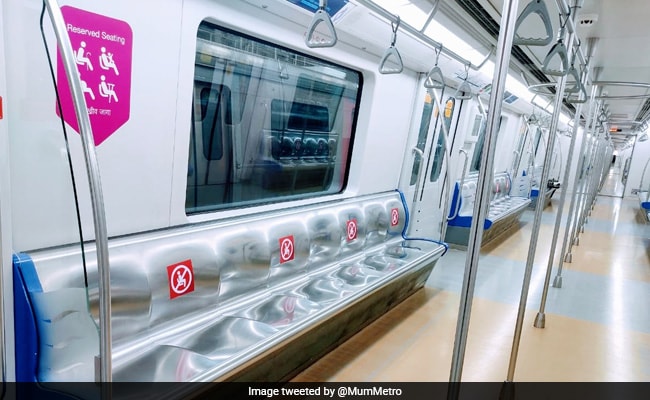 The Delhi Metro had resumed operation on September 7 (File)

The Maharashtra government has decided to resume metro train services from October 19 in a phased manner, weeks after the Centre, in its Unlock4 guidelines, allowed the reopening of the rapid transport system across the country. The operation of metro trains will ease pressure on conventional public transport mediums like local buses in Mumbai, which is the worst sufferer of the coronavirus pandemic.

In Mumbai, only one line that connects the eastern and western suburbs of the city was functional before the pandemic struck the country. The line, which is a critical part of the city's east-west connectivity, will be operated from next week with strict anti-Covid standard operating procedure, which primarily focuses on social distancing and the usage of masks to prevent the transmission of the virus.

The Delhi Metro, the largest metro train network in the country, had resumed operation on September 7, with strict protective measures against the coronavirus. Only asymptomatic people are being allowed to board trains and stations at containment zones are shut. The passengers have been asked to download the Aarogya Setu app on their smartphones and are undergoing thermal checks at stations.

Under the guidelines, the authorities had decided to discourage cash transactions and tokens.

Based on central guidelines in August, the metro authorities of Delhi, Noida, Chennai, Kochi, Bengaluru, Jaipur, Hyderabad, Kolkata, Gujarat and Uttar Pradesh had prepared their standard operating procedures and have been running metro services since last month.

Maharashtra, the state with most coronavirus cases and deaths, however, had not allowed the resumption of metro trains.

The Uddhav Thackeray government has also allowed the reopening of all state-run and private libraries from Thursday. It has also allowed business-to-business exhibitions from tomorrow outside containment zones.

The Shiv Sena-Congress-NCP alliance government is under pressure from the BJP to reopen places of worship. On Wednesday, after protest from the party, Governor Bhagat Singh Koshyari wrote to Uddhav Thackeray "requesting him to announce forthwith" the reopening of places of worship with Covid precautions.

"I wonder if you are receiving any divine premonition to keep postponing the reopening of places of worship time and again or have you turned 'secular' yourselves, a term you hated?" he wrote in the strongly worded letter.

The Chief Minister retorted that his Hindutva did not require a certificate from the Governor or anyone and that he would take a decision after careful consideration.

"Nobody Will Be Stopped": Haryana Police After Delhi Lets Farmers In