The Brihanmumbai Municipal Corporation has suspended two engineers who carried out a structural audit of the foot overbridge. 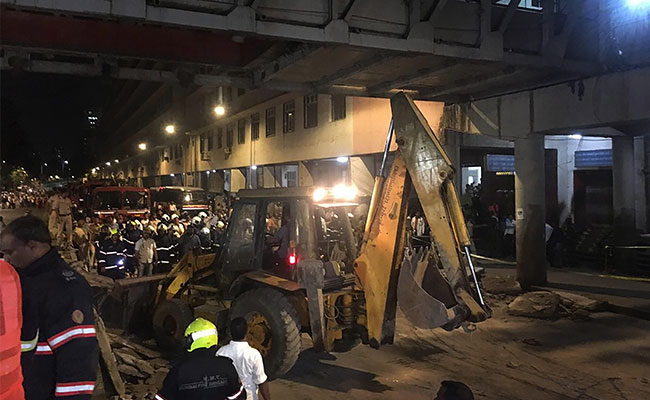 Six people were killed and 33 others were injured in the foot overbridge collapse.

A preliminary report released by the Mumbai civic authority has held engineers who conducted a structural audit of the ill-fated foot overbridge near the Chhatrapati Shivaji Maharaj Terminus responsible for its collapse on Thursday evening. Six people were killed in the incident.

"It's apparent that the structural audit report failed to point out the impending failure. In spite of commissioning the report of bridge & spending public money on it, the true condition of bridge was not brought out. The structural report should be made public," news agency ANI quoted the Brihanmumbai Municipal Corporation as saying today.

According to the news agency, the civic body has suspended two engineers who carried out the structural audit of the foot overbridge. A full-fledged departmental inquiry will also be carried out against them, it added.

Maharashtra Chief Minister Devendra Fadnavis had earlier clarified that the foot overbridge was among a number of structures subjected to an audit after the Andheri bridge collapse last year. Terming the incident as "unfortunate", he said: "A structural audit of the bridge had been done earlier, and it was found to be fit. If such an incident happened even after that, it raises questions on the audit. An inquiry will be carried out. Strictest action will be taken."

Thousands of commuters used to cross into the railway terminus through the foot overbridge every day. It is also referred to as "Kasab Bridge", given that terrorist Ajmal Kasab was photographed on it on the day of the 2008 Mumbai attacks.

Relatives of the victims also questioned the reason for the foot overbridge's collapse when it was declared "fit" by engineers. "They say they had conducted a structural audit of all bridges. What exactly happened in this audit? If they said the bridge was fine, how did it collapse?" asked a relative of Ranjana Tambe, a nurse who was walking under the structure when it crumbled. She died before she could be taken to a hospital.