Shujaat Bukhari, 53, and his two personal security officers (PSOs) were shot dead by gunmen outside the newspaper's office in the heart of Srinagar on June 14. 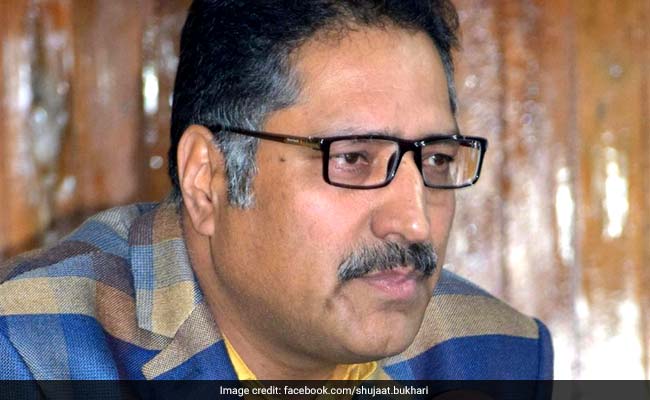 Former vice president Hamid Ansari on Monday said that mourning the killing of senior journalist Shujaat Bukhari was "not enough" and the society must realise the "challenge" it faces when it comes to the freedom of expression.

Addressing a gathering at a memorial service held in Delhi for the slain Rising Kashmir editor, Mr Ansari described him as a man, who "stood for sanity" in different conditions.

Shujaat Bukhari, 53, and his two personal security officers (PSOs) were shot dead by gunmen outside the newspaper's office in the heart of Srinagar on June 14.

He was killed soon after he boarded his car from his office in the Press Enclave at Lal Chowk.

"He was a good man, a good editor, a thinking citizen, snatched away so brutally. And, we all have to think why... Someone said many, many years ago that when freedom is in peril, the first symptoms are to be found in those who carry the voice of the people and the sentiments of the people to a larger audience," the former vice president said.

"Bukhari sahab's death is an example of that. It is not the only example, we have had another instances in our society when those who speak honestly, candidly, are punished, and punished in the most brutal manner possible," he said.

In his speech at the event, hosted by the Bureau of Research on Industry and Economic Fundamentals (BRIEF), a think-tank, of which Bukhari was a part of, Ansari also obliquely referred to the killing of senior journalist Gauri Lankesh, who was shot dead last year right outside her home in Bangalore.

"We had the case in Bangalore, we had other cases. Therefore, as people we need to stop and think, as to where we are going," Mr Ansari said.

"We used to take great pride in being an open and a free society. We still take that pride, but we do stop and question -- is that open society in peril," he asked.

He said Shujaat Bukhari stood for sanity, sanity in very different conditions knowing fully well that whatever he said was being disliked by somebody or the other.

"And, this is what the greater challenge is. His death is mourned by all, family, friends and a much larger circle. But mourning is not enough. We should realise that we face a challenge.

"The challenge is... the most cherished freedom, the freedom to express opinions. Because, if that challenge develops further then it is not one editor, it is every citizen, who is threatened by it," Ansari said.

The former vice president also quoted a few Urdu couplets to pay tribute to Bukhari, whose killing had sent shockwaves throughout the country.

Many of his kin, friends, admirers, colleagues from Kashmir and several well-known journalists from Delhi also attended the memorial service hosted at the India Islamic Cultural Centre. Some of them pitched for getting justice for him and not let the perpetrators go unpunished.

Incidentally, the National Human Rights Commission on June 25 had sent a notice to the Jammu and Kashmir chief secretary and the state's police chief in connection with the killing of Bukhari, and observed that the incident was causing "serious threat" to free speech and freedom of press in the state.

Shujaat Bukhari's brother-in-law Hafiz Ayaz broke down on the dais, while recounting the life of the slain journalist, saying, "The intensity of the wounds is so deep that it cannot be healed."

"Besides being a passionate journalist, and writing in English, he also contributed a lot towards his mother-tongue Kashimri, besides promoting other art forms and culture of the region," Mr Ayaz said.

Senior Congress leader Manish Tewari said Bukhari had the courage of conviction to speak and write his mind.

Mr Ansari ended his address by offering his condolences to Bukhari's family and said, "I hope his banner will be carried by those who have succeeded him in the newspaper and the society at large."

A representative of the Pakistan High Commission here also attended the event.