Many more farmers' bodies are likely to join the protesters, according to the inputs received by the Home Ministry. 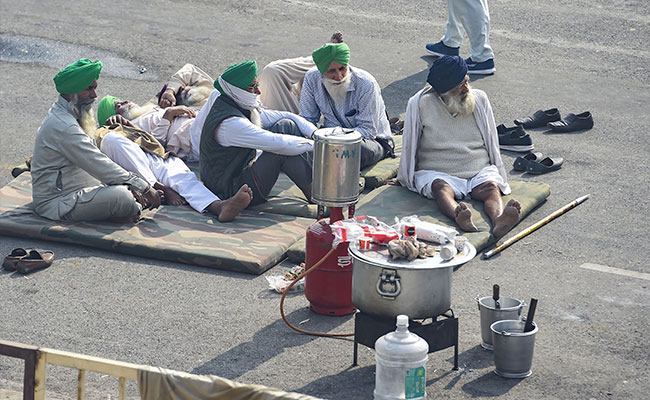 Farmers have been protesting against the centre's controversial laws.

Numbers swelling at Delhi's borders amid huge protests against the controversial farm laws, security forces have been told by the government to show restraint, officials have told NDTV.

Many more farmers' bodies are likely to join the protesters, according to the inputs received by the Home Ministry. "We have information that farmers from Nanital and Amritsar would be joining protesting farmers," a senior officer revealed.

According to him, these group of farmers are arriving in large number in tractors and trucks. "Farmers from Amritsar and Nanital are reaching Gazipur border (Delhi-Uttar Pradesh border), and since there are restrictions on entering the national capital, they have been camping on the outskirts," he adds.

According to him, even though they do not move ahead but assembly of hundreds more will further lead to chaos. "Another group of 500 farmers would be reaching Bilaspur and Gurgaon (in Haryana) and from there, they would be joining protesting farmers," sources said about the inputs shared with the Home Ministry.

"They are prepared for long haul and we are trying to engage with them," a senior police officer said.

"Security Forces have been asked to restrain themselves while handling law and order situation along the borders in and around the national capital," a top official further added.

According to him, police has been using coercive methods to deal with the farmers. "At the Tikripur border, the situation got tense.... but to control the agitating crowds police jawans lay on the ground in order to stop kisaans from moving ahead," he discloses.

Meanwhile, he Delhi Police has strengthened arrangements in outer and New Delhi districts. As many as 25 companies are on duty along the boders to keep the situation under control.