Pandits say they will return to their duties in the Valley only after Government finishes militancy so that there is no fear of being targeted. 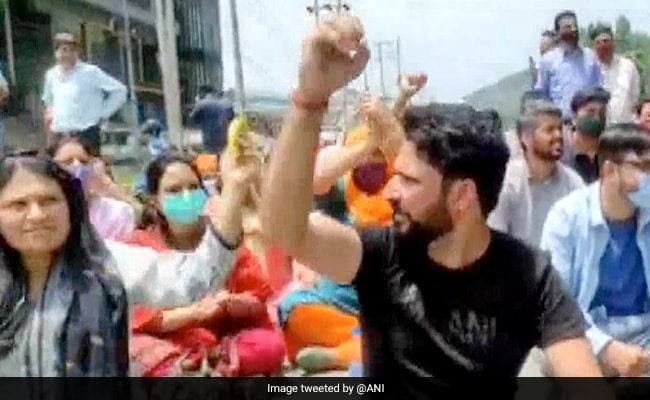 A candle light vigil, hunger strike and a pledge to fight for their safety and relocation to Jammu marks one month of protests by Kashmiri Pandits after killing of Rahul Bhat. Mr Bhat, a Revenue department employee was shot dead inside a magistrates office last month. Since then Kashmiri Pandit employees have refused to attend their duties fearing terrorist attacks.

"All the PM package employees of Food and Civil Supplies department, Ganderbal district, are hereby directed to resume their duties with effect from June 16,2022," reads an order.

Confined to transit camps in the Valley, the migrant Pandit employees held a day-long hunger strike at Vessu camp and pledged to fight for their relocation to Jammu.

Pandits say they will return to their duties in the Valley only after Government finishes militancy so that there is no fear of being targeted.

"For how long you will keep us inside the four walls of the camps. Government has to take a call. Our demand is very simple, you attach (shift) us till the time situation is improved. If you make situation safe tomorrow we will join tomorrow," said Sanjay Koul, a Kashmiri Pandit employee.

Over 4,000 Pandit employees who had returned as part of Prime Ministers Special Employment Package since 2010 - have refused attend their duties for last one month. Most of them have already left the Valley and shifted to Jammu. Those who are still in transit camps say they can't even step outside their camps following targeted attacks.

Over the last five months, 22 civilians, including one Kashmiri Pandit have been killed in targeted attacks by terrorists.

Pandits say their demand is just because it concerns their safety and life.

"For last one month we are disturbed and can't attend our duties... government is not doing anything on our security and safety issues," said Ramesh Raina, a Pandit employee at Vessu camp.

Pandit employees have rejected government decision to shift them to safer locations within the Valley. They say no place is safe in the Valley in present security scenario.

After announcing a series of decisions on security and welfare of Pandits, the Governments challenge remains how to convince its own employees that they are safe at their workplaces in the Valley.