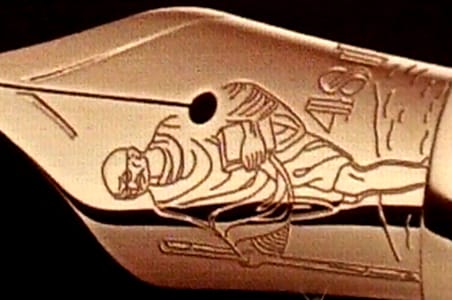 Kochi: Swiss luxury giant Mont Blanc on Tuesday tendered an unconditional apology in the Kerala High Court on the issue of sale of its high-end Mahatma Gandhi edition pens, saying it did not intend to hurt the sentiments of any citizen.

Mont Blanc Simplo GmBH also gave an undertaking before a division bench that the limited edition pens, each of which cost Rs 14 lakh, would not be sold until further orders.

The Bench comprising acting Chief Justice P R Raman and Justice C N Ramachandran Nair was hearing a PIL filed by Dijo Kappan complaining that sale of pen in the name of Gandhi violates the provisions of Emblems and Names (Prevention of Improper Use) Act, 1950.

The company said they were tendering an "unconditional" apology if the sentiments of any of the citizen had been hurt.

The bench directed the company to file a further affidavit incorporating the assurance given to the court.

In the counter affidavit filed by Marc Frisanco, authorised signatory of the company, it claimed that they have a long history of supporting charitable causes as well as the heritage and importance of iconic historical figures from art and culture to world leaders in different platforms.

It was further stated that they would be donating USD nine lakh to charitable institutions in India especially those recommended by Gandhi's great grandson Tushar Gandhi.

The company submitted it had no intention of violating the provisions of the Act.

Mont Blanc said they were under the erroneous impression that permission from the central government was not required for bringing out the limited edition pens.

They had no intention of using Gandhi's name or picture as part of the trade, it said.
The company sought a direction to the central government to regularise use of Gandhi's name and picture on the pen.