Addressing a gathering of some 2,500 delegates attending the second World Hindu Congress, Mohan Bhagwat, however, said the Hindus have no aspiration of dominance. 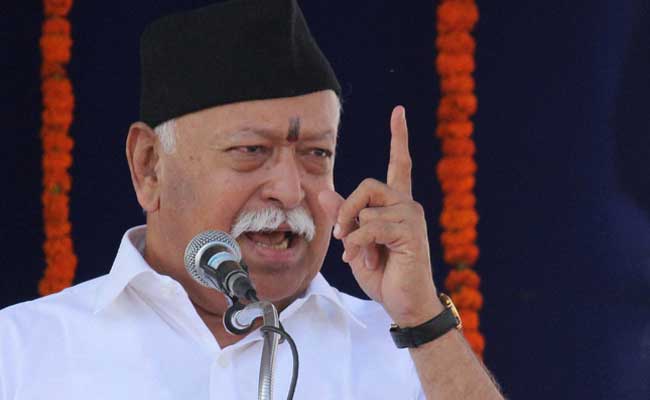 Mohan Bhagwat at the World Hindu Congress said in Hindu dharma, even a pest is not killed, but controlled

Lamenting that the Hindus have been suffering for thousands of years, RSS chief Mohan Bhagwat has asked them to come together and organise themselves, saying "if a lion is alone, wild dogs can invade and destroy him".

Addressing a gathering of some 2,500 delegates attending the second World Hindu Congress, Mohan Bhagwat, however, said the Hindus have no aspiration of dominance.

"The Hindu society will prosper only when it works as a society," he said. "One of the key values to bring the whole world into a team is to have controlled ego and learn to accept the consensus. For example, Lord Krishna and Yudhishtra never contradicted each other," Mohan Bhagwat said.

Stating that it is very difficult to bring the Hindus together, he said: "Coming together of the Hindus is in itself a difficult thing."

"In initial days of our work, when our karkyakartas used to talk to Hindus about organising them, they used to say 'sher kabhi jhund mein nahi chalta' (a lion never walks in a group). But even that lion or a royal Bengal tiger who is the king of the jungle, if he is alone, wild dogs can invade and destroy him."

Mohan Bhagwat said a sense of idealism is good and described himself not as "anti-modern", but as "pro-future".

He sought to describe the Hindu dharma as "ancient and post-modern".

In this context, he alluded to the war and politics in the Hindu epic Mahabharat, and said politics cannot be conducted like a meditation session, and it should be politics.

"To work together, we have to accept the consensus. We are in a position to work together," Bhagwat said at the conference inspired by the Hindu principle 'Sumantrite Suvikrante' or 'Think Collectively, Achieve Valiantly'.

He urged the conference attendees to discuss and evolve a methodology to implement the idea of working collectively.

He said the Hindu society has the largest number of meritorious persons.

"But they never come together. Coming together of Hindus in itself is a difficult thing," he said.

He noted that Hindus had been suffering for thousands of years because they forgot to practice its basic principles and spiritualism.

"We have to come together," Mohan Bhagwat said, noting that all the people need not to register under one umbrella.

He noted that the Hindus had been suffering for thousands of years because they forgot to practice its basic principles and spiritualism.

Addressing the congress,' Mohan Bhagwat highlighted the need for such an action, and how Hindus should work together.

He said in Hindu dharma, even a pest is not killed, but controlled.

"Hindus don't live to oppose anybody. We even allow the pests to live. There are people who may oppose us. You have to tackle them without harming them," Mohan Bhagwat said.