A MiG-21 trainer aircraft belonging to the Indian Air Force (IAF) Tactics and Air Combat Development Establishment (TACDE) school crashed near its Gwalior Air Force Base in Madhya Pradesh this morning. The fighter jet, which was on a routine mission, crashed at around 10 am. Both pilots - a Group Captain and a Squadron Leader - managed to eject safely.

"The two pilots ejected safely, according to the information passed to us from the village head from the spot, some 60 km from the district headquarters," Rudolf Alvares, Bhind Superintendent of Police, told news agency PTI.

This is thought to the 12th IAF crash in this year alone. The Air Force has ordered an inquiry into the incident to ascertain the cause of the crash.

In March, another MiG-21 crashed in Bikaner in Rajasthan. The pilot managed to eject successfully. According to sources, the plane took off on a routine mission afternoon when its engine developed technical issues.

According to the Air Force, the MiG-21 is a Soviet-era single-engine multirole fighter/ground attack aircraft that forms the backbone of its fleet. It was first inducted into the IAF in the 1960s, soon after the Indo-China War and upgraded to the MiG-21 Bison version in 2006.

The upgrades included powerful multi-mode radars, better avionics and communication systems. Although these jets could initially only carry "dumb bombs", they are now capable of transporting a wide range of guided munitions. 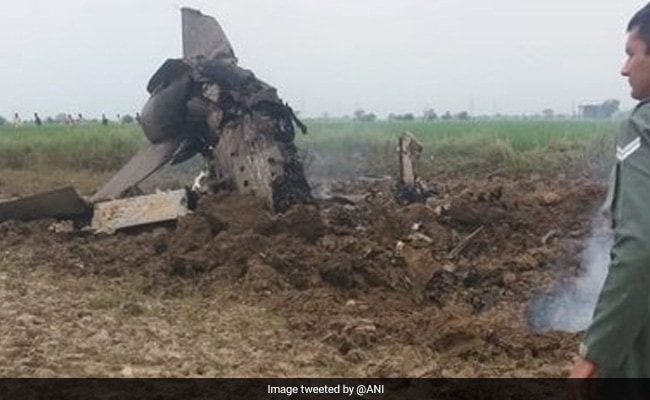 The MiG-21 crash occurred at around 10 am

The MiG-21 Bison is the same type of plane Wing Commander Abhinandan Varthaman was flying in February when he shot down more advanced F-16 fighter jets belonging to the Pakistan Air Force.

India's ageing MiG-21 fleet is expected to be partially phased out by the introduction of 36 Rafale aircraft - French-made all-weather multirole fighter jets.