Tom Vadakkan said it was part of sycophancy masterminded by a "particular senior leader" who did the same thing during Sonia Gandhi's tenure as party president. 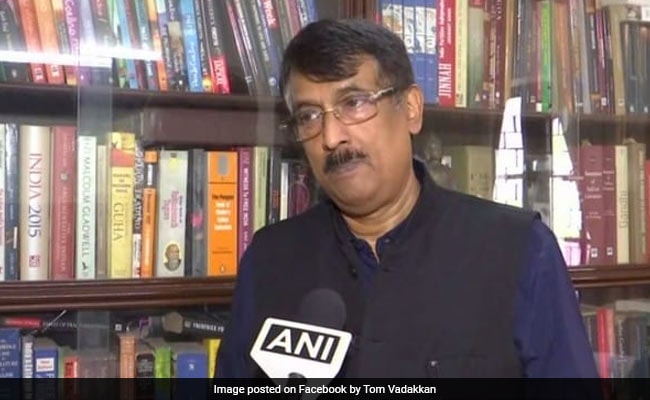 Tom Vadakkan switched to the BJP in March ahead of Lok Sabha polls. (File)

BJP member Tom Vadakkan on Saturday claimed as "scripted drama", the recent mass resignations in the Congress, following Rahul Gandhi's refusal to withdraw his resignation as president of the party, following its defeat in the national elections.

Tom Vadakkan, who once was the face of the Congress in the capacity of a spokesperson, told ANI that the "scripted resignation drama" was part of sycophancy masterminded by a "particular senior leader" who did the same thing during Sonia Gandhi's tenure as party president.

"People who have been following the Congress know that the script is same - the resignation drama. You will have a hold horde of resignations coming which has no meaning. It is part of sycophancy that is creating a situation where there is a face-saver but the point is the script is the same that has been played out" Tom Vadakkan said.

"I can see the fingerprints of a particular senior leader who is masterminding the operation. It has been the same leader who did it during Sonia ji's time, nothing new and nothing special," said Tom Vadakkan who switched to the BJP in March this year, ahead of 17th Lok Sabha elections.

Tom Vadakkan, considered among the loyalists of the Nehru-Gandhi family had claimed that the dynastic politics in Congress had reached a level which is not acceptable to "self-respecting people".

Mr Vadakkan's response came after scores of Congress leaders and office bearers put in their papers from the party following Rahul Gandhi's adamancy to resign from the post after facing a humiliating defeat in the general elections.

As many as 145 office bearers tendered a mass resignation during a meeting conducted in the Congress office.

Mr Gandhi, who became the party president in 2017, offered to step down from his post at the Congress Working Committee (CWC) meeting on May 25, taking moral responsibility for Congress'' dismal performance in the 17th general elections.

However, his resignation offer was unanimously rejected by the CWC. So far, several top leaders have met Mr Gandhi and urged him to continue to lead the party.

Despite senior members making serious attempts to convince the 49-year-old party chief to rethink his decision, he remains unfazed.

The Congress won 52 seats in the recent general elections, which is just eight more than 2014 in the outgoing Lok Sabha.