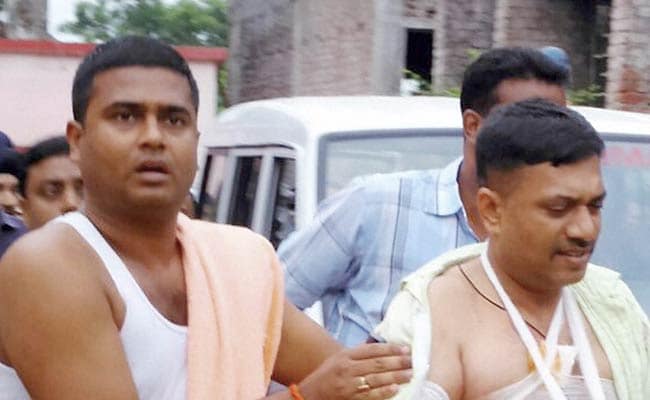 SSP Prabhat Kumar, injured in an encounter with Maoists at Jojohatu, in Khunti district of Jharkhand on Tuesday. (PTI photo)

Ranchi: Two persons, including the self-styled area commander of banned CPI (Maoist) Chandanji were killed while Ranchi Senior Superintendent of Police (SSP) Prabhat Kumar and his bodyguard suffered bullet injuries during an encounter in Khunti district, about 35 km from Ranchi today.

The encounter took place when Mr Kumar on getting information that 'Chandanji's dasta', firing squad of the Maoist leader was at a place on Khunti-Ranchi road headed the search operation.

When the police approached the area, they came under fire and the SSP's driver was killed, Jharkhand Director General of Police DK Pandey told PTI.

"Ranchi SSP Prabhat Kumar suffered bullet injury on his right shoulder. He has been admitted to a hospital and is out of danger," Pandey told PTI.

"Kumar's bodyguard is also out of danger," he said. "Two Maoists were also injured in the encounter," he added.

Mr Das has asked the officials to ensure that the injured police officer and his body guard gets proper treatment, the sources added.

On getting information that Maoists gathered near Dulmi village near Marang bazaar on the borders of Ranchi and Khunti, the SSP and Additional Superintendent of Police, rushed to the spot along with security men.

The Deputy Inspector General of Police (Ranchi range), Arun Kumar, said one AK-47 rifle was recovered from the spot and added that around eight Maoists who had gathered there.

The deceased driver has been identified as Rumul Sevaiva, an official release said.

Saluting the exemplary courage of the deceased driver, Jharkhand Chief Minister Raghubar Das announced Rs 10 lakh to his family, besides insurance claim, employment to a member of the family, which will draw salary till the scheduled retirement date and education to children, the release said.

He lauded the bravery of the police personnel fighting the left wing extremists. Mr Das said it was not possible to get solutions to any problem through violence.

He called on the injured SSP and his bodyguard, Mohammad Faizal, at Bhagaban Mahaveer Medical Hospital in Ranchi.