Manipur assembly elections 2017: Polling for the state's 60 seats was held in two phases.

The India-TV-C Voter poll predicts the BJP will win 25 to 31 seats -- the upper end giving the party a clear majority. The Congress, it says, will trail with 17 to 23 seats.

The India Today-Axis survey gives the Congress 30 to 36 seats and the BJP between 16 and 22 seats.

Last year, the BJP had opened its account in the north-east by sweeping the assembly elections in Assam along with its allies. In the process, it ended the 15-year rule of Congress led by Tarun Gogoi.

The party won a whopping 86 of Assam's 126 seats - a victory powered by strategic acquisitions of local leaders disenchanted with the Congress.

In Manipur too, the Congress has been in power for three terms -- its government led by Chief Minister Ibobi Singh. But over the last six months, in a pattern similar to Assam, many of top Congress leaders have shifted to the BJP. Most of them belong to the Kuki tribe -- traditionally a Congress support base -- who control the hill areas.

Chief Minister Ibobi Singh tried to win back their loyalty, but his damage control measure - bifurcation of seven districts said to be for administrative convenience - has only alienated the Nagas.

Promoted
Listen to the latest songs, only on JioSaavn.com
The results of the two-phase polls which ended on March 8 will be declared on March 11. 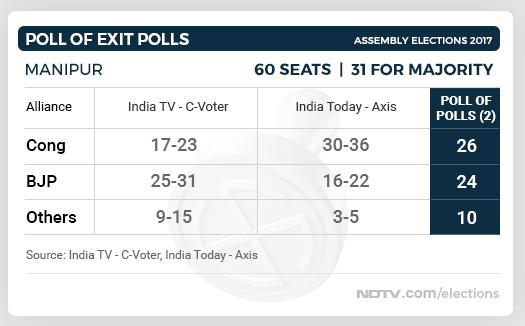