Two men on a motorcycle sped down the road, with the pillion holding on to a black bag. Only on the other end of the bag was another man, getting dragged. 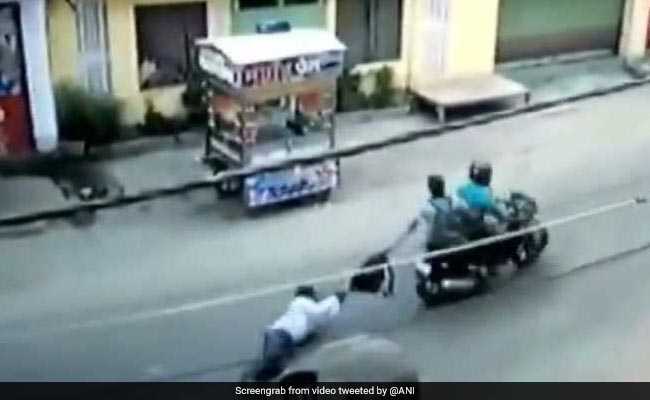 A man was dragged on the road by bikers who tried to snatch his bag, in Bihar's Hajipur today.

A nine-second CCTV clip starts as just another Tuesday morning in Hajipur, a city in Bihar, barely 10 kilometres from state capital Patna - people walking on the road, sparse traffic moving along.

And then, the scenario completely changes in the last three seconds.

The footage shows two men on a motorcycle speeding down the road, with the pillion holding on to a black bag. Only on the other end of the bag was another man, getting dragged behind the motorcycle, desperately clutching on to it.

The bag, reportedly had Rs 2.5 lakh in cash.

#WATCH Bihar: A man was dragged behind bike after two unidentified bike-borne miscreants snatched Rs. 2.5 lakh from him in Hajipur, earlier today. pic.twitter.com/Gnwkxe1de6

The two men had tried to snatch the bag from its owner, who did not let go. As the robbers tried to speed away, the man was dragged on the road.

The CCTV footage, released by news agency ANI, shows the owner being dragged for about 50 metres before he finally loses his grip and the bike-borne men escape.

A pedestrian can be seen turning in horror as the entire scene unfolds.

There is no information yet on the man's condition or the bag snatchers.