Party Spokesperson Pawan Khera was speaking to someone when the man cut him short and went in front of the dais with the tricolour in hand and started addressing the room of people. 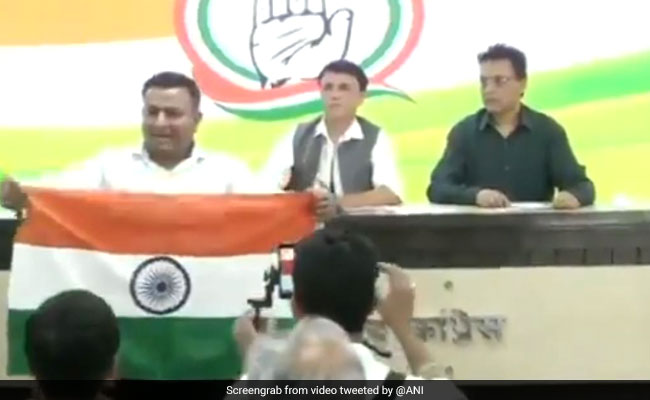 With the national flag in hand, a man on Wednesday disrupted a Congress presser briefly raising objections on calling Uttar Pradesh Chief Minister Yogi Adityanath by his real name Ajay Singh Bisht. He followed this with chants of Vande Mataram and Bharat Mata ki Jai before he was whisked away by guards.

Party Spokesperson Pawan Khera was speaking to someone when the man cut him short and went in front of the dais with the tricolour in hand and started addressing the room of people.

"Calling Yogi Adityanath Ajay Singh Bisht is an insult of Indian culture. Vande Mataram, Bharat Mata ki jai," the man said before he was escorted out by security officials. Many started recording the incident on their mobile phones.

Yogi Adityanath, a monk who later joined the Bharatiya Janata Party, was born as Ajay Singh Bisht. He is also the head priest of the Gorakhnath Math, a Hindu temple in Gorakhpur. He has held the position since the death of his spiritual "father", Mahant Avaidyanath, in September 2014. He was given the name Yogi Adityanath after he became the disciple of Mahant Avaidyanath.

The man was identified as Nachiketa who is from Ahmednagar in Maharashtra. He claims to be an "inactive" BJP member.

On being probed about the motive behind his stunt at the press conference, Nachiketa told news agency ANI, "I'm a citizen of India and can enter into any press conference. They are calling Yogi Adityanath by his name Ajay Singh Bisht, it is against the Indian culture."

In an apparent attack on Congress chief Rahul Gandhi, the man also said, "Whoever's father or mother is a foreigner, should not contest the elections in India." He called this a "breach of national security."

Rahul Gandhi's mother Sonia Gandhi, who is the UPA chairperson, was born and brought up in Italy before her marriage to former Prime Minister Rajiv Gandhi. Rahul Gandhi is contesting the elections from two seats, Amethi in Uttar Pradesh and Wayanad in Kerala.

Pawan Khera resumed the presser after the man was escorted out.