Mallikarjun Kharge, Flanked By Who's Who Of Congress, Files Nomination

Mallikarjun Kharge's entry was a last-minute twist after Ashok Gehlot dropped out. The message was delivered to him by KC Venugopal, a trusted leader of the Gandhis. 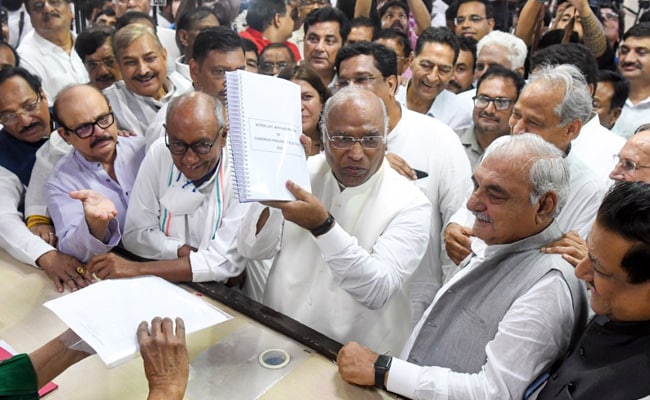 As Mallikarjun Kharge formally joined the Congress president election by filing his nomination papers today, he was flanked by 30 leaders, including Ashok Gehlot, previously the front-runner.

Mallikarjun Kharge's entry was a last-minute twist after Ashok Gehlot dropped out. The message was delivered to him by KC Venugopal, a trusted leader of the Gandhis.

Though the Gandhis said they would be neutral, Mallikarjun Kharge's nomination at the Congress office made it clear that he has the blessings of the leadership. His papers were signed by a galaxy of leaders.

Prominent among them is Ashok Gehlot, who bowed out of the contest yesterday after apologising to Sonia Gandhi over the rebellion by MLAs loyal to him over reports that if he ran for party president, his rival Sachin Pilot would replace him.

Digvijaya Singh, who was all set to file his nomination until Mr Kharge came into the picture, was also one of his proposers.

Mr Kharge also received support from leaders of the "G-23" or group of 23 dissenters who wrote to Sonia Gandhi in 2020 calling for big reforms in the party, including elections for top posts. Mukul Wasnik, Anand Sharma, Bhupinder Singh Hooda and Manish Tewari, the most prominent of dissenters, who were discussing putting up a candidate, have all come out in support of the Gandhis-backed candidate.

This, despite one of their fellow "dissenters", Shashi Tharoor, contesting the Congress chief election.

A prominent name missing from the list was P Chidambaram.

In contrast, Shashi Tharoor had 10 backers, which is the minimum needed.

His nomination papers had 50 signatures compared to Mr Kharge's 140.

Mr Tharoor described his opponent as the "Bhishma Pitamah" of the party.

"It is a friendly contest that is going to happen. We are not enemies or rivals. No disrespect to him but I will represent my ideas," the Lok Sabha member from Thiruvananthapuram told reporters.

The Congress closed the nominations at 3pm with three candidates. Apart from Mr Kharge and Mr Tharoor, KN Tripathi also filed his papers. Over 9,100 delegates are eligible to cast their votes in the October 17 election. The result will be announced on October 19.