Leader of Opposition in the Maharashtra Legislative Council Dhananjay Munde slammed Mr Tawde and said the media only shows what was happening around. 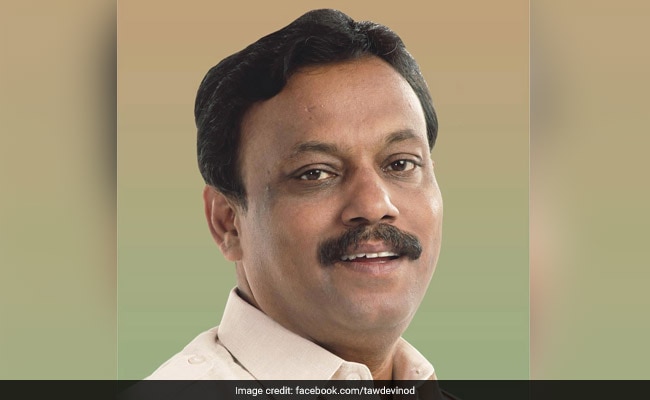 Vinod Tawde was unavailable for comment, while two other BJP spokespersons refused to speak on the issue

Maharashtra Education Minister Vinod Tawde has blamed the media for portraying a "dirty" image of politics, evoking sharp reactions from the opposition parties as well as its restive ally Shiv Sena.

Addressing a group of students at Wilson College Friday, Mr Tawde had asked how many of them wanted to join politics.

When his question elicited a poor response, the senior BJP minister said, "It is often said that politics is dirty. This image is created when some stray clippings (of politicians) are played by the media. No doubt the media shows news which are true, but some of them are not."

Mr Tawde, who is in Delhi Saturday, was unavailable for comment, while two other BJP spokespersons refused to speak on the issue.

Slamming Mr Tawde for his remarks, Leader of Opposition in the Maharashtra Legislative Council Dhananjay Munde said the media only shows what was happening around.

He added that the irresponsible behaviour of politicians reflected poorly on the minds of citizens.

"Blaming the media for showing the deteriorating state of politics in the country today is wrong. Politicians have to introspect about what is causing the standard of politics to fall to new levels everyday," the Nationalist Congress Party leader said.

Mr Munde further claimed that the ruling BJP extensively used the media and social media to come to power at the Centre and in Maharashtra in 2014.

"When the same media is showing the true face of the BJP now, attempts are being made by the party to silence it," he claimed.

Shiv Sena spokesperson Manisha Kayande said instead of blaming the media, it is the duty of politicians to behave and speak responsibly in public and set an example for students and society.

"Tawde ji seems to be forgetting that it is he who has been embroiled in one controversy after the other over his habit of speaking out of turn. When he was asked about his bogus educational degree, the media only did its job.

Recently, when there was a tamasha over him agreeing to distribute religious texts in colleges, the media only reported it," she claimed.

She said the controversy created by BJP lawmaker Ram Kadam was not started by the media and it could not be blamed for the widespread condemnation the remarks received.

Mr Kadam, during Janmashtami celebrations in suburban Ghatkopar on Monday, had said that he would kidnap girls to help boys get married even if the former had rejected their proposals.