Addressing the flood-hit people at Katgaon in Maharashtra's Osmanabad as he toured parts of the Marathwada district, Mr Thackeray said the state cabinet will meet soon to take a decision on the relief to be given to the affected people. 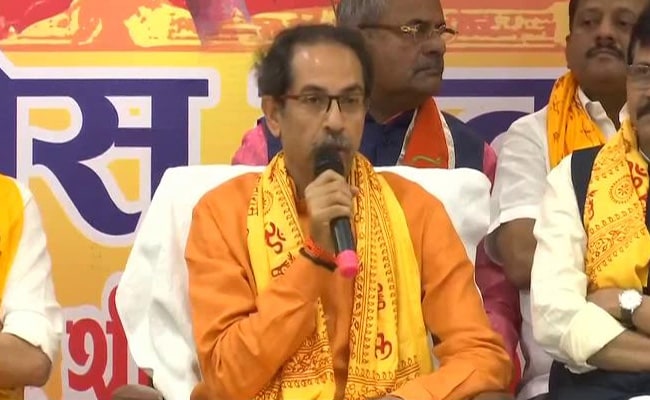 Maharashtra Chief Minister Uddhav Thackeray on Wednesday said his government is committed to restore normalcy in the lives of those hit by heavy rains and floods in the state as soon as possible.

Addressing the flood-hit people at Katgaon in Maharashtra's Osmanabad as he toured parts of the Marathwada district, Mr Thackeray said the state cabinet will meet soon to take a decision on the relief to be given to the affected people.

According to a Maharashtra minister, who did not wish to be named, the cabinet is likely to meet on Thursday.

The Chief Minister said he would not declare figures related to assistance only to gain popularity and asserted that he commits only what he can fulfil.

Talking to reporters later in the day, Mr Thackeray said the state government could have done a lot for the flood-hit people had the Centre given Maharashtra the states share of the Goods and Services Tax (GST)

Last week, heavy rains and floods claimed at least 48 lives in Pune, Aurangabad and Konkan divisions, while crops on lakhs of hectares were damaged.

During a public meeting in Katgaon, Thackeray said, "The cabinet will meet today or tomorrow. Spot inspections have been completed up to 80 to 90 per cent...this Maha Vikas Aghadi government is committed to restore normalcy in your life as soon as possible."

"I am not here to declare figures for popularity. Whatever we will do, will do it for your satisfaction and for your happiness," he told the people.

Mr Thackeray also said that the India Meteorological Department (IMD) officials told him that the threat of heavy rainfall in the state has waned, while lightning may occur over the next seven to eight days.

"This year has begun with calamities - coronavirus, floods in Vidarbha and now heavy rains in other parts of the state," the Chief Minister noted.

"I am here to witness the losses and to assure you that the government is with you. Along with crops, the soil has also been washed away...help will be given as soon as possible," he said.

Addressing media persons later, Mr Thackeray said the state government will ensure there are no tears in the eyes of the flood-hit people during the Dussehra and Diwali festivals.

"As I am speaking to you, the work on (giving relief to the people) is on in Mumbai," Mr Thackeray said, adding his government is for giving substantial help to the people.

The Chief Minister further reiterated that the state government is yet to receive its GST share from the Centre.

"We can do a lot if we get that (GST) dues, but there is no clue yet (when that amount will be shared). Hence, at present, a thought is being given to whether loan can be taken or anything else can be done. We will take a decision on that today or tomorrow," he said.

"Maharashtra has spent a lot on infrastructure like labs and jumbo hospitals to tackle COVID-19. But in this situation also, the state will do its best to help farmers," he said.

Farmer Arvind Mali informed Mr Thackeray about the losses he suffered due to the heavy rains.

"The soil of my land is washed away due to heavy rains. My children's books also got damaged. Even the basic food items like salt and chilly power are not left. I have faith that the CM will help us and he has assured the same," he said.