Ajit Pawar also interacted with the flood-affected people and assured them of rehabilitation and all help from the state government. 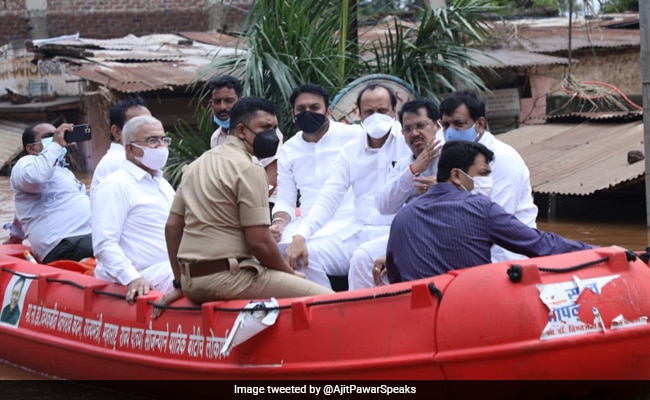 Ajit Pawar will hold a review meeting after taking stock of the situation.

Maharashtra Deputy Chief Minister Ajit Pawar toured various rain-hit villages in Sangli district on Monday and used a rescue boat to reach out to flood victims in some areas.

Mr Pawar also interacted with the flood-affected people and assured them of rehabilitation and all help from the state government.

State Water Resources Minister Jayant Patil, Relief and Rehabilitation Minister Vijay Wadettiwar and Minister of State Vishwajeet Kadam accompanied Pawar during his visit to the flood-battered Bhilwadi and other areas of the district.

They used a boat to reach out to people affected by the monsoon mayhem in Bhilwadi.

According to the district administration, Mr Pawar will hold a review meeting after taking stock of the situation.

Meanwhile, the water level of the Krishna river at Irwin bridge was at 52.11 feet at 11 am, as against the danger mark of 45 feet, an official said.

Chief Minister Uddhav Thackeray will visit some of the rain-affected areas in Patan tehsil of Satara district on Monday.

The Chief Minister on Sunday visited Chiplun, the site of severe flooding in Ratnagiri district in the Konkan region, and interacted with residents, businessmen and shopkeepers. He promised them all help from the state government to restore normalcy in the area.

Mr Thackeray had said they will require "central assistance for long-term mitigation measures" and a comprehensive data of the extent of damages will be prepared.

Heavy rains last week caused floods and landslides in some areas of Maharashtra, including the deadliest landslide at Taliye village in the Raigad district.

Aryan Khan Says 'Nothing To Do With Payoff Charge, Witness' In Court Reply