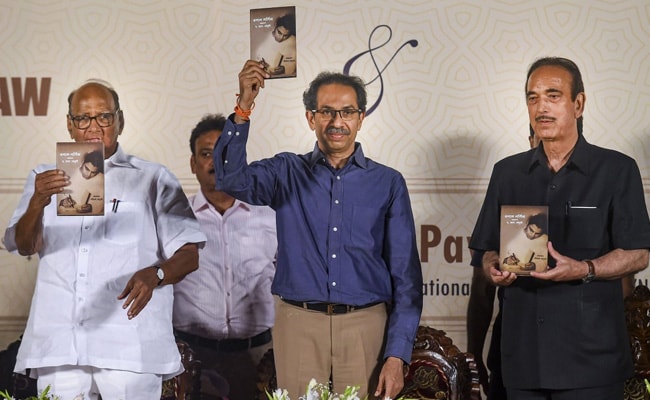 Mr Pawar said Antulay was an excellent administrator and strong political leader, and described the book "Banaam Nargis Baqalam AR Antulay" as a compilation of letters written by "barrister saheb (Antulay) to his wife which shows his commitment and dedication to his relationship of love".

Mr Thackeray said Antulay was a good friend of Sena founder late Bal Thackeray and described the book as "dil ki baat which is different from mann ki baat", an apparent swipe at Prime Minister Narendra Modi on his radio address.

"Antulay saheb wrote these letters every day and his wife preserved them for so many years...this shows the relationship was strong from both sides," Mr Thackeray added.

He also said the book was a lesson in letter writing. The CM recalled that the late Sena patriarch and Antulay never hid their friendship.

"I remember after becoming Union minister, Antulay had said he was the Shiv Sena's ambassador in Delhi. I think the Congress took action against him. Now what wrong did he say? If he was alive today, he would have been proud that his friend's son is the state's chief minister," Mr Thackeray said.

Looking in the direction of Mr Pawar, Mr Thackeray added that "all my father's friends love me".

"Many people must be thinking what is Balasaheb's son doing at Anjuman-I-Islam. After joining hands with the Congress, have I converted? But the knowledge imparted at this institution has kept its foundation strong," he said, going on to add that film legend Dilip Kumar was also a friend of the Sena founder.

Both Antulay and Kumar are alumni of Anjuman-i-Islam and the Sena always stood by nationalists, be it Hindus or Muslims, Mr Thackeray added.

"In troubled times like now, educational institutions need to give right direction to the youth. Creation of human wealth is the responsibility of education institutions," said Mr Thackeray.

Hindus and Muslims must know that stones are good when they are used to construct centres of knowledge, the CM said, adding he was a neighbour of the institution as he studied at the JJ School of Art next door.

Mr Pawar said the book highlighted the strong bond between Antulay and his wife. He said Antulay was a "dashing chief minister" and an

excellent administrator who knew the pulse of the people.

After Emergency was lifted, Thackeray decided against contesting polls as a mark of support for Gandhi and Antulay, Mr Pawar told the gathering.

Mr Pawar said Antulay and he started out around the same time and became ministers for the first time in the Vasantrao Naik government, and remained friends despite heated exchanges in the Assembly when Antulay was CM and he was leader of opposition.

Mr Pawar praised the book and recounted that Pandit Nehru's letters to his daughter Indira and YB Chavan's letters to his wife about his travels as Union minister had been published before.

Antulay's daughter Neelam, who has published the book, said she was touched by how beautifully her father could express himself on paper and claimed the letters were art which revived a feeling of nostalgia.

Leader of Opposition in the Rajya Sabha and senior Congress leader Ghulam Nabi Azad was also present on the occasion.