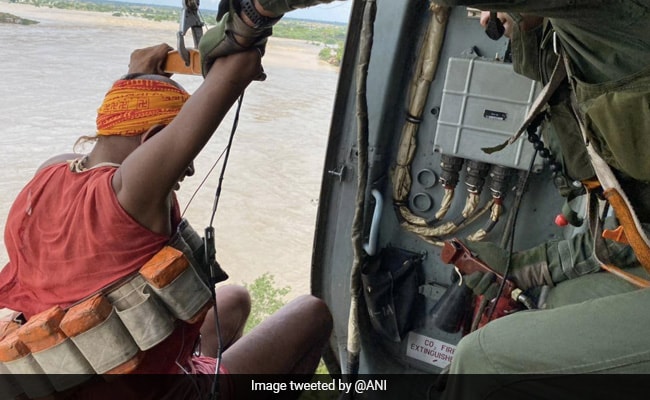 Twelve people have died and seven injured in various rain-related incidents in flood-ravaged Gwalior and Chambal divisions of Madhya Pradesh, officials said on Thursday, even as the IMD sounded a fresh heavy rain alert for 23 districts.

The rainfall in Gwalior and Chambal divisions in north MP has now abated, rescue operations have ended and relief operations have begun, officials said. The region was being pounded by rains since Sunday.

"Twelve rain-related deaths had been reported till yesterday. No death was reported today," said divisional commissioner Ashish Saxena, speaking to PTI over phone.

Some deaths took place in the incidents of house or wall collapse, and in some cases carelessness cost people their lives, he said. A man drowned while watching a river in flood while some others were swept away while crossing flooded bridges, Mr Saxena said.

Three people were rescued on Thursday in Bhind by choppers, while aircraft dropped food packets and other emergency aid material in the worst-hit Sheopur and Datia districts, the commissioner said.

"Seven people have been injured -- four in Guna, two in Shivpuri and one in Morena," state revenue secretary Gyaneshwar B Patil told PTI. Rescue operations have almost ended, he added.

As many as 30,790 people were evacuated to safer places in Gwalior and Chambal divisions and around 6,000 people were staying in 126 relief camps, Mr Patil said.

Four big bridges and 21 medium bridges were damaged in Sheopur and Datia.

"The state has not seen such devastation in the last 70 years that the rain-ravaged Gwalior-Chambal region is facing. Bridges near the Ratangarh Mata Temple and Sankua in the area were damaged and many people got stranded," a state official quoted chief minister Chouhan as saying during a meeting earlier in the day.

Mr Chouhan spoke to Prime Minister Narendra Modi in the morning. The prime minister assured all possible help to the state, officials said.

The chief minister also spoke with Union Home Minister Amit Shah who said the Centre will send an advance team to assess the damage, officials said.