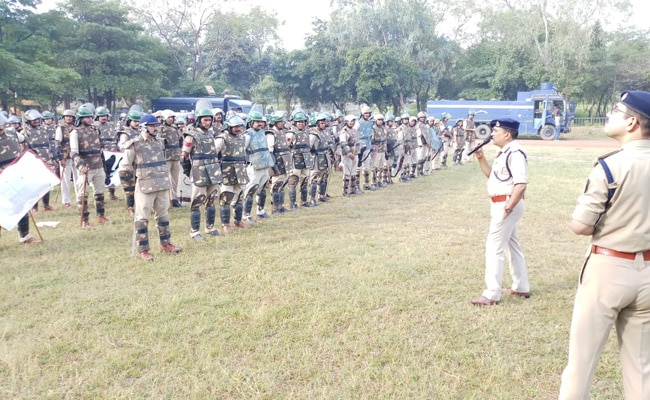 Ahead of the Ayodhya case verdict, the Madhya Pradesh Police carries out a drill

The Madhya Pradesh Police are gearing up to prevent any trouble as the Supreme Court's verdict on the Ayodhya temple-mosque dispute case is expected to come by November 15, the last working day of Chief Justice of India Ranjan Gogoi before he demits office on November 17.

The police said they will not tolerate any "objectionable content" on social media and messenger services like WhatsApp.

Any gathering of four or more people has been banned in several districts including state capital Bhopal.

The police have asked the field staff of other departments and Anganwadi workers to keep an eye on possible trouble.

Police sources said beat constables have been made temporary nodal officers in charge of peacekeeping duties at residential areas, villages and towns. The Anganwadi workers will support the beat constables and act as "influencers" to maintain calm.

The police said they are going out with a message that irrespective of the top court's verdict, it was the duty of every citizen to ensure that peace and community harmony are maintained.

The new security plan involves participation of staff of government departments along with the beat constables in 1,100 police station areas across 52 districts.

The police have carried out emergency drills to control big crowds. Police officers and government employees in Madhya Pradesh have been asked not to take leave till further notice.

The dispute over 2.77 acres of land in Ayodhya, which both Hindus and Muslims claim, has been among the topics that has dominated political discourse since the 1980s.

In 1992, right-wing activists razed the 16th century Babri mosque that they believed was built on the ruins of an ancient temple that marked the birthplace of the Lord Ram. In the riots that followed, more than 3000 people were killed across the country.