The man was allegedly caught at the Singhu border on the outskirts of Delhi by the protesting farmer leaders who paraded him before reporters on Friday night. 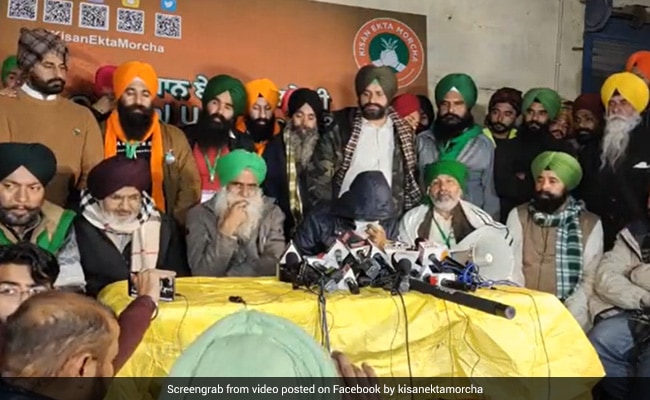 The man was presented in front of the media on Friday night by farmers.

The man presented by protesting farmers near Delhi at a news conference late Friday had lied about plotting to disrupt their agitation and "assassinate" four leaders on Republic Day, the police said on Saturday.

The Haryana police have been questioning the man after agitating farmer leaders alleged that he was involved in a conspiracy to kill four of them and disrupt their planned tractor parade in Delhi on January 26.

"Yesterday, he alleged that he was tasked by one inspector Pradeep, SHO (Station House Officer) of Rai Police Station. Our preliminary investigation shows that there is no inspector named Pradeep is in the district or at Rai Police Station," Sonipat district police chief Jashandeep Singh Randhawa said.

"He is a resident of Sonipat. His father is a cook and his mother washes dishes. This masked person used to work in a factory. After the COVID-19 lockdown, he was expelled and is currently unemployed. On questioning, it came to the fore that he had arguments with farmer volunteers over allegations of eve-teasing. He was taken to a camp where he was beaten up. He has said he made statements under fear. No criminal record was found against the person," he said, adding the man is not under arrest.

"He had alleged that he used to get calls from a landline number. Details gathered by us don't show any such thing. He was also not present at the Chief Minister's rally in Karnal on Jan 10 as alleged," the police officer said.

The man, said to be 21, was allegedly caught at the Singhu border on the outskirts of Delhi by the protesting farmer leaders who paraded him before reporters on Friday night and later handed him over to the police.

His face covered with a scarf, the man claimed that a plan was hatched to assassinate four farmer leaders, who are known faces in the media and are organising the movement against the central government's new farm laws, on the stage on Saturday.

At the press briefing, he also said there were nine others, including two women, who were part of the team meant to spark chaos at the tractor rally, although he didn't know the names of the others. He said he was trained by a police official.

In the biggest agitation facing Prime Minister Narendra Modi's government since he took office, hundreds of thousands of farmers have been camping on the outskirts of national capital for nearly two months, blocking some of the roads connecting New Delhi with neighbouring states.

PM Modi's government has said that the laws introduced in September will unshackle farmers from the obligation of selling produce only at regulated wholesale markets. But the farmers say the bills are designed to benefit private buyers