Made Mistakes, But Will Present A New Congress, New Vision: Rahul Gandhi

Rahul Gandhi said the Congress will put pressure on the BJP government to pass the Women Reservation bill in Parliament. 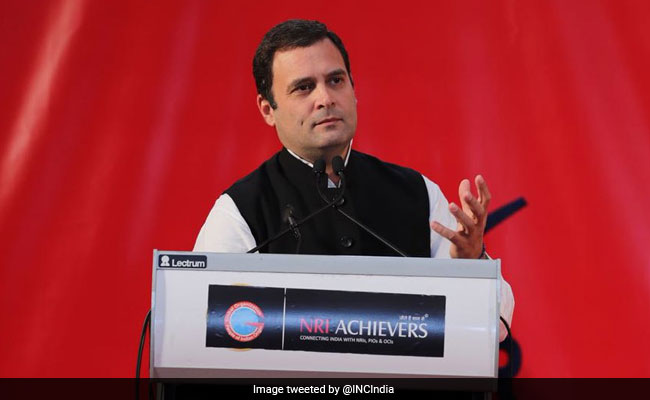 Manama: Congress President Rahul Gandhi on Monday admitted that he also "made mistakes as he is also a human being" and promised to present a new party, whose focus will be to give a "new vision" to India.

"You said Congress party accepted its mistake. I am admitting that I also made mistakes. I am a human being. We all make mistakes," said Mr Gandhi during an interaction with the NRIs here to a query about the mistakes of his party.

"You said there is gap. There is a gap in the media. In media, the campaign could be one-sided. But, we are fighting on the ground. Gujarat is the BJP's bastion and stronghold. But they somehow managed to escape the defeat (in the assembly election)," he added.

"Congress party has questioned them (the BJP) in the state. So, we are fighting them on the ground. Our focus is to give India a new vison, a new Congress party to the people.

"If you give a new Congress party to you, it is not a big thing to defeat the BJP. We have made mistakes. But we too have our strengths in the party. Former Prime Minister Manmohan Singh had predicted a 2 per cent fall in GDP when demonetisation was announced," he noted.

Mr Gandhi also said, during the interaction, that job creation, transforming the education system, and developing a strategy for global healthcare system will be three main focus of the Congress party when it comes to power.

Promoted
Listen to the latest songs, only on JioSaavn.com
He also said the Congress will put pressure on the BJP government to pass the Women Reservation bill in Parliament.