The world's best scientists are trying to create a 'miniature Sun' on Earth to tap its fusion energy, costing over Euro 20 billion and India is a full partner in this mega project. Called The ITER Project or The Path, it has Made in India written all over it.

Having committed about Rs 17,500 crores, Prime Minister Narendra Modi took stock of this mega project on his recently concluded trip to France. India, by contributing to about ten per cent of the cost, gets access to one hundred per cent of technology. This is the most expensive mega-science effort India is participating in and globally ITER is the most expensive science project on Earth ever to be undertaken in the 21st century. The total weight of the ITER reactor will be about 28,000 tonnes.

Far away in France this team of over one hundred Indians is trying to do the seemingly impossible, tapping the Sun's real energy source to give the world an unlimited supply of clean energy. Being made collaboratively by USA, Russia, South Korea, China, Japan, European Union and India as equal partners or participating in this mega effort are countries that together hold 50 per cent of the world's population accounting for about 85 per cent of the global GDP.

NDTV visited the heart of the facility to take a look at the place where the Sun will be re-born on Earth. 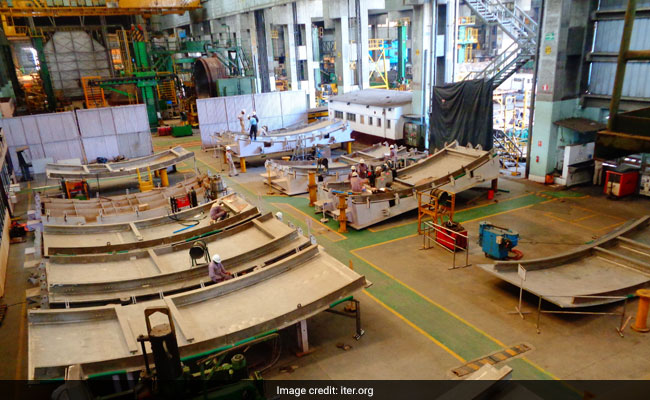 Dr Mark Henderson, a scientist at ITER, said, "This place to me is the coolest place on Earth, because here in the near future we will have a little Sun on Earth and it will be a 150 million degrees Celsius so it will be the hottest place on Earth, ten times hotter than our Sun." He says as per one calculation ten such fusion reactors could power all the energy needs of Italy.

India has contributed the biggest component in the project - the world's largest refrigerator that houses this unique reactor, was made in Gujarat by Larsen & Toubro. It weighs over 3800 tonnes and is almost half the height of the Qutb Minar.

Dr Tim Luce, Chief Scientist at ITER called India "a valuable partner" and said it made key components like the cryostat, which is perhaps one of the biggest thermos bottles in the world. On being asked how much carbon dioxide the main culprit for global warming would be released from the ITER project Dr Luce quips "only the carbon dioxide the scientists exhale". The radioactive substances generated from reactions would be the sort that can die off in a hundred years.

The project is a herculean effort and operations are expected to start by 2025. Later a full scale electricity generating unit called the DEMO reactor is scheduled to be completed by 2040.