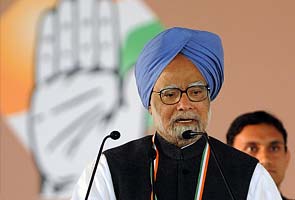 New Delhi: The Cabinet has approved the Lokpal draft Bill at a meeting today. The version drafted by the government. The one drafted by Anna Hazare and his team stands dumped. The Prime Minister has not been included under the purview of the Lokpal - he can be investigated only after he demits office.

Law Minister Salman Khursheed explained that under the Lokpal Act, there will be no procedure against the PM while he is in office. Also, there shall be a seven-year limitation period for complaints. So the Lokpal will not investigate a complaint over seven years after it is made. But, he said, the Prevention of Corruption Act has no such restrictions.

It has been decided that the Lokpal will have a Chairperson and eight members - 50 per cent of them will be from the judiciary as will the chairperson, who has to be a serving or retired Chief Justice of India or Supreme Court judge. The non-judiciary members have to be "persons of impeccable integrity and outstanding ability," Information and Broadcasting Minister Ambika Soni said.

The removal of the Lokpal will be the prerogative of the President of India.

The extended Cabinet meeting went on for about two hours and points of divergence between civil society members and the government were also discussed - the main sticking point is the inclusion of the Prime Minister under the purview of the Lokpal. Prime Minister Manmohan Singh was quoted as having said at the meeting, "If you want to me there, I have no problem. I leave it to the Cabinet."

Sources said almost every minister belonging to all parties allied to the UPA spoke at the meeting, except those from the DMK. The Sharad Pawar-led NCP was of the view that the PM should be kept out of the purview of the Lokpal. The Trinamool said it would go with the government.

The UPA government had promised it would take the Bill to the Monsoon session of Parliament, which begins on Monday next.

After several meetings earlier this year, members of the civil society and those from the government - brought together to draft a Lokpal Bill to address corruption - had failed to agree on certain points and each side had drafted its own version. The version cleared today is the government's draft with some changes.

As a formality, the draft put forward by Gandhian Anna Hazare's team of crusaders is expected to be put as an appendix to the cabinet note. Lawyer Shanti Bhushan has written a letter to Finance Minister Pranab Mukherjee requesting him to present both the drafts in Parliament.

Promoted
Listen to the latest songs, only on JioSaavn.com
Anna Hazare has contended that the government's version of the Lokpal Bill falls "far short" of people's expectations. The Gandhian has threatened to go on an indefinite fast from August 16 if a "proper" draft of the Bill is not brought before Parliament.

Mr Hazare had met with Congress president Sonia Gandhi on June 30, along with a host of other senior leaders to convince them to adopt his version of the Lokpal Bill.