Congress was in power for 55 years at the centre but it befooled the people of the country in the name of eradicating poverty right, Rajnath Singh said. 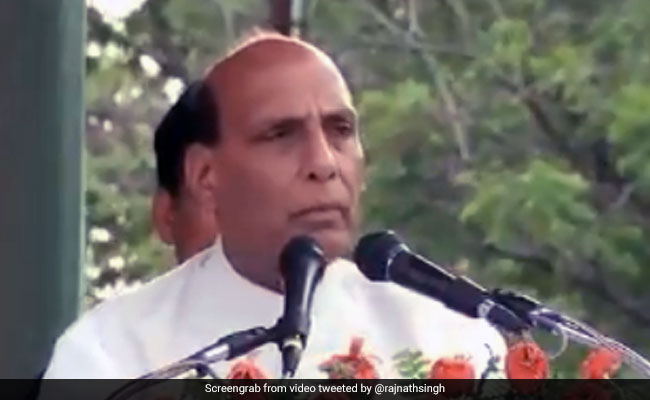 While replying to those who sought to know the number of terrorists killed in Balakot airstrike in Pakistan to avenge killing of 40 CRPF jawans, Mr Singh referred to a foreign journalists write up which claimed that 170 terrorists were killed in the IAF operation on terror camps.

"Congress was in power for 55 years at the centre but it befooled the people of the country in the name of eradicating poverty right from first PM Jawaharlal Nehru to Indira Gandhi and Rajiv Gandhi. Rajiv Gandhi even admitted that out of 100 paise only 15 paise reaches to poor people", he said on Mr Gandhi's highly touted NYAY proposal.

The senior BJP leader was addressing an election rally in favour of JD(U) nominee on Karakat Lok Sabha seat Mahabali Singh and BJP candidate Satya Narayan Singh for Dehri assembly by-poll, both of which will see voting in the last phase on May 19.

Congress president Rahul Gandhi and his party talks about abolishing the sedition law, but we will make the law even more stringent so that nobody dares to indulge in acts that may be detrimental to the national integrity, he said.

The government has been able to check corruption because of which beneficiaries are directly getting the money into their bank accounts under various schemes, Mr Singh said.

He said 2019 election is the second occasion since first general poll in 1951 when price rise is not an issue.

The first one was in 2004 when the nation went to polls under the leadership of Atal Bihari Vajpayee, he added.

This (price rise not being the issue in the election) is possible because of better and sound financial management and crackdown on corruption, Singh said.

Talking about containing Maoism, he asserted that Maoists were earlier spread in 126 districts but now they have been confined to a very little area and will be completely wiped out from the country. The Home Minister also enumerated Modi governments achievements such as providing 13 crore cooking gas connections, building 1.30 crore houses, constructing 32 km of national highways against the earlier regimes track record of 6 km per day.