Over 64% Voting In Madhya Pradesh Till 6 PM, Say Officials

Voting on Sunday started at 7 am in Bhopal, Morena, Bhind, Gwalior, Guna, Sagar, Vidisha and Rajgarh constituencies in the sixth phase of the general elections. 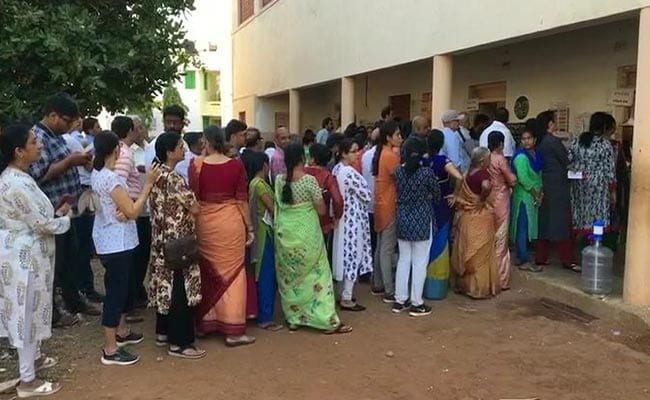 Lok Sabha elections to 29 seats in the state are being held in four phases.

A voter turnout of 64.01 per cent was recorded till 6 pm in the eight Lok Sabha seats in Madhya Pradesh that went to polls on Sunday, an official said, adding that the final figure would be released later.

Of the 29 Lok Sabha seats in the state, six went to polls in the fourth phase on April 29 and seven in the fifth phase on May 6. After the polling on Sunday, the rest eight seats in Madhya Pradesh will be held in the final phase on May 19.

Voting on Sunday started at 7 am in Bhopal, Morena, Bhind, Gwalior, Guna, Sagar, Vidisha and Rajgarh constituencies in the sixth phase of the general elections.

The official said voting was peaceful across the state.

These figures were released at 8 pm, and an official said final figures will be released later.

At 4 pm, he told reporters said that voters in three villages in Morena and one in Rajgarh had initially boycotted the polls and till 3 pm, only four people had voted in Semlikankad village which falls under Rajgarh Lok Sabha seat.

Election Commission officials said the final voting percentage in the four villages would be updated later as reports from there were still coming in late Sunday evening.

Rao had said that during the polling, EVMs were changed at 102 booths across eight parliamentary seats.

Congress general secretary Jyotiraditya Scindia, who is seeking re-election from Guna seat, cast his vote at a booth early in the morning in Gwalior, a party spokesperson said. Mr Scindia is locked in a battle with BJP's KP Yadav, who is contesting his first Lok Sabha election.

Former chief minister Shivraj Singh Chouhan and his family members cast their vote at their native village Jait, which falls under the Vidisha Lok Sabha seat. Union minister Narendra Singh Tomar, who is the sitting Lok Sabha lawmaker from Gwalior, is in the fray from Morena seat this time.

Altogether 138 candidates are in the fray for the eight Lok Sabha seats. Of these eight seats, seven were won by the BJP in 2014.

"In total, 18,141 polling booths were set up, where over 1.44 crore people, including 32,909 service voters, were eligible to exercise their franchise," he said.

Over 45,000 security personnel were deployed for the smooth conduct of the polls.