Smriti Irani fact-checked Rahul Gandhi, tweeting his photo in front of a plaque that said 2007.

Union Minister Smriti Irani today called out Congress president Rahul Gandhi over a tweet in which he had claimed to have launched an ordnance factory in his constituency Amethi in 2010. Smriti Irani tweeted photos that indicated he had actually done so in 2007.

Rahul Gandhi's tweet was meant as criticism of Prime Minister Narendra Modi, who had visited Amethi on Sunday, launched a unit for the manufacture of AK-203 rifles as an India-Russia joint venture and later targeted the Congress chief at a political rally.

"I laid the foundation stone of the ordnance factory in Amethi in 2010. For many years it has produced small arms. Yesterday you went to Amethi and as is your habit, you lied again. Have you no shame," Rahul Gandhi tweeted in Hindi. 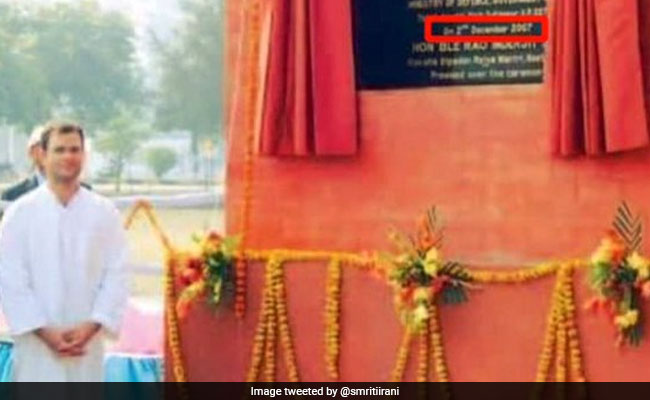 Rahul Gandhi's tweet was meant as criticism of PM Modi, who had visited Amethi on Sunday.

"See this photo carefully, you are at the 2007 event but this morning, you said 2010. Was it 2007 or 2010? Such mistakes happen, Rahulji. You have lied so much about Amethi that when you did the shilanyas (ground-breaking) and when satyanash (destruction), you can't remember," tweeted the Union Minister, a relentless Rahul Gandhi critic and frequent visitor to his constituency, which she has been paying attention to since 2014, when she contested and lost the national election from there.

Earlier, she had said in response to his tweet calling PM Modi a chronic liar: "You are so afraid of development in Amethi that you didn't bother to see that yesterday a joint venture was launched at Korva. This is a joint venture between India and Russia to produce AK 203 rifles," tweeted the Union Minister.

PM Modi yesterday travelled to Amethi for the first time since he came to power in 2014. 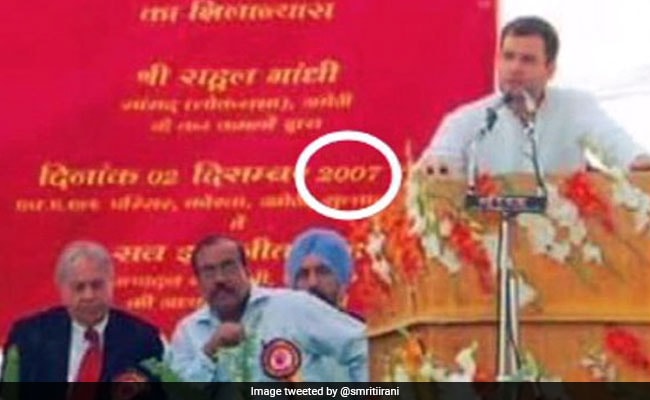 PM Modi accused Mr Gandhi of failing to deliver on his promise of jobs.

Rahul Gandhi ji is holding a responsible position. Why don't some sensible people in Congress Party tell him that compulsive liar is a person who tells falsehoods out of habit, sometimes for no reason at all. It is also known as pathological lying, mythomania and habitual lying. https://t.co/XLHOOBAEXC

The Prime Minister called Amethi the best example of his government's motto "Sabka Saath, Sabka Vikas (development for all)" and said the town would have a "new identity" and would be known by the AK-203 Kalashnikov rifles that would be made there.

The Prime Minister accused the Congress chief of failing to deliver on his promise of jobs. "Why believe such a person," PM Modi said.