Lok Sabha Elections: Mayawati was apparently upset at the Samajwadi Party workers raising slogans during her speech at a campaign event. 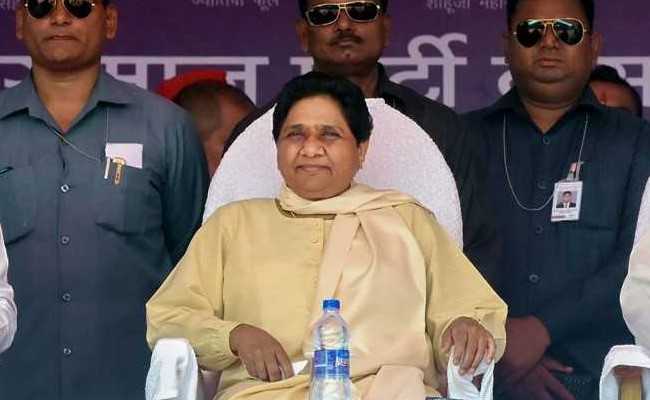 Mayawati was addressing a rally in UP's Faizabad.

Bahujan Samaj Party chief Mayawati on Saturday said the workers of Samajwadi Party, her ally and one of the three parties in the opposition gathbandan (alliance) in Uttar Pradesh, "have a lot to learn from the BSP workers".

The BSP chief was apparently upset at the Samajwadi Party workers raising slogans during her speech at a campaign event. "The way you people shout in the middle of a speech... I think you should learn something from the Bahujan Samaj Party workers. The Samajwadi workers have a lot to learn," she said while addressing a gathbandan rally in UP's Firozabad.

Mayawati, the four-time UP chief minister, has cobbled up an alliance in the state with Akhilesh Yadav's Samajwadi Party, an old rival, and Ajit Singh's Rashtriya Lok Dal for the national elections to take on the ruling BJP.

At the campaign rally on Saturday, she also suggested opinion polls were being manipulated by the political parties to mislead the voters. "Parties are going all out to create an environment favourable for them by manipulating the media, opinion polls and surveys. Voters should not be misled by these things," she was quoted as saying by news agency ANI.

Mayawati is among the few political leaders in the state known for penchant for punctuality. "When she is in Lucknow, she does not encourage the party cadre to flock to either her residence or party office. When she calls for party meetings, only those who are invited can go inside the venue and supporters are asked to stay away. Demonstrations or sloganeering outside her party office or her residence in Lucknow are very rare," said a source.

Also, to manage crowds at rallies, Mayawati has groups of party workers and volunteers who ensure everyone sits in allocated spaces. For instance, men are strictly prohibited from occupying spaces meant for women.

Samajwadi chief Akhilesh Yadav, on the other hand, encourages cadre participation on a daily basis. Whenever he is at the party 's Lucknow office, hundreds of party supporters gather, raising slogans in his favour.

The BSP chief, who has earlier said she won't contest the 2019 national elections, clarified at the Mainpuri event about the "Guest House" incident, 24 years ago, when she was manhandled by the Samajwadi workers.

Praising the Samajwadi patriarch, she suggested the two parties buried old differences and came together in "larger interest". "Mulayam Singh ji is not a fake backward leader like the prime minister. Sometimes looking at the country's future you have to take a difficult decision in the larger interest... Mulayam Singh Yadav ji has changed over the years... he has done a lot to ensure people, especially women get their due share during the Samajwadi Party's rule," she said in Mainpuri on Friday.

The two parties have come under constant attack from the ruling BJP leaders, who have been saying their alliance will eventually fall out.

Prime Minister Narendra Modi at an election rally in UP's Etah on Saturday called the alliance "fake". "You all remember the friendship that was struck during the assembly polls in Uttar Pradesh that came to an end with the announcement of the results and turned into rivalry," he said referring to the 2017 assembly polls in the state and the understanding between the Congress and the Samajwadi Party.

"The farzi dosti of 'bua' and 'babua' will also end the same way," PM Modi said, in an apparent jab at Mayawati and Samajwadi Party president Akhilesh Yadav, often referred to as bua (aunt) and bhatija (nephew).

Sixteen constituencies in UP, which which sends maximum lawmakers to parliament, have voted in the first and second phase of national elections on April 11 and April 18. The remaining 64 constituencies in the state will vote on April 23, April 29, May 6, May 12, and May 19. The votes will be counted on May 23.