"Will Teach Him To Fight Elections In Wayanad": Left Attacks Rahul Gandhi

Lok Sabha Elections 2019: The Congress has said that "nothing will work against Rahul Gandhi" in Wayanad. 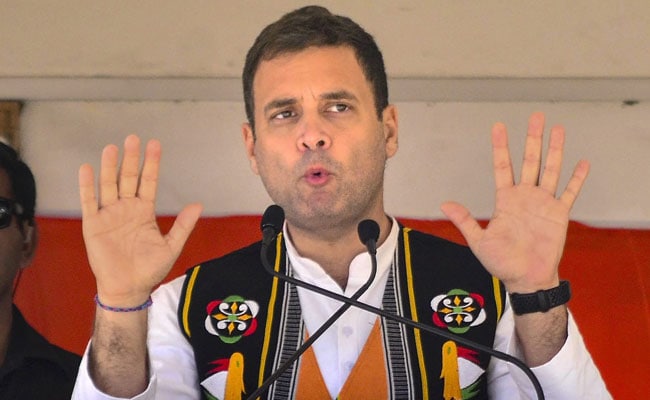 "It will be easy for Rahul Gandhi to win polls in family bastion Amethi, but Wayanad is different": Left

Not impressed by Rahul Gandhi's decision to contest the Lok Sabha polls from Wayanad in Kerala, Left parties Wednesday asserted that they will teach him how to "fight elections on the ground", even as the Congress said nothing will affect its chief's prospects in the state.

"We are fighting these polls to win", a senior CPI leader said, on the eve of Mr Gandhi filing his nomination to fight the elections from the hill constituency.

The Left Democratic Front (LDF) -- a coalition of left-wing parties in Kerala -- has fielded CPI's PP Suneer from the Wayanad parliamentary constituency, which has seven assembly segments, three each in Wayanad and Malappuram districts and one in Kozhikode district.

The fourth phase of campaign is meeting families and it will commence in two days.

The Left feels that the people of the constituency will not choose a candidate like Mr Gandhi as he would not be able to concentrate fully on their issues due to his busy schedule as Congress president at the national level.

"Rahul Gandhi is like an invisible God. It will be easy for him to win polls in his family bastion Amethi (Uttar Pradesh). But the soil of Wayanad is something different. We will teach him on how to fight elections on the ground", Mr Cherukara told PTI.

He said the morale of some Left leaders were slightly hit after Gandhi decided to contest elections from Kerala but "our workers have become more energetic and are ready to take up the challenge."

Left workers have unleashed a campaign on the ground against "the anti-farmer, anti-tribal and anti-minority policies of both the Congress and the BJP", Mr Cherukara said.

"We will introduce new campaign methods like flash mobs to reach out to young voters of the constituency. Separate campaigns will be organised to reach out to tribals, farmers and minorities", he said, adding that the Left is getting "stronger".

The Congress, however, said that "nothing will work against Rahul Gandhi" in Wayanad.

"The people of Kerala are discussing only one thing. That is Gandhi's decision to fight polls from Wayanad, a tribal district. It shows his commitment to address problems of poor and marginalised in the society", said Mr Rajasekharan, who is also the UDF election committee convenor of the Sulthan Batheri assembly segment.

Senior Congress leader and state INTUC chief R Chandrasekharan said the people, particularly farmers, were upset with the anti-farmer and anti-labour policies of the state and central governments.

Farmers are committing "suicide" in Wayanad and other parts of Kerala due to the crisis in agriculture sector and the Congress under Gandhi's leadership is committed to address their issues if the UPA is voted to power, he said.

He said the Congress and its trade union wing INTUC will highlight the issue of crisis in the farming and labour sectors and "suicide of farmers" in Wayanad and other parts of Kerala during the election campaign.

"The Central and state governments have failed to address the issues in farming sector post the devastating floods in Kerala. Suicide of farmers are reported from many parts of Kerala and some from Wayanad district also," the Kerala Indian National Trade Union Congress said.

He said the Congress in its manifesto has promised to have a separate budget for farmers and help them the burden of farm loans.

This will help the farming community to come out of the deep crisis they now face due to denial of minimum support price (MSP) for their produce for last five years, he said.

Thousands of farmers, who engaged in farming after taking bank loans, are facing revenue recovery proceedings in Wayanad district alone, according to various agriculture organisations.

Mr Gandhi will reach Kozhikode Wednesday night. He will reach Wayanad district collectorate in Kalpetta at 11.30 am Thursday to submit his nomination.