"Five years ago, Priyanka Gandhi didn't know my name. Now she keeps taking my name... such an accomplishment," Smriti Irani remarked as she spoke to reporters in Amethi. 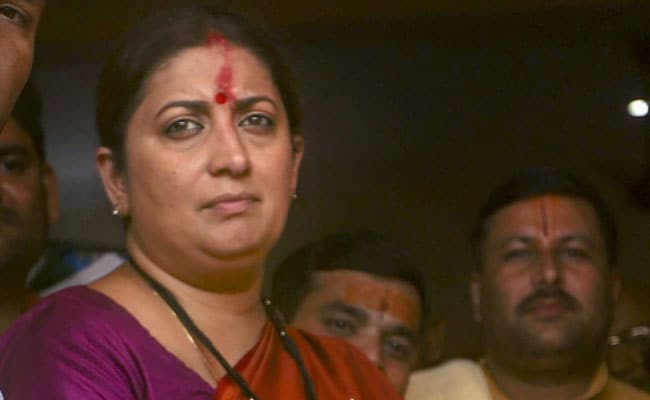 As voting took place in Uttar Pradesh's Amethi, one of the most-watched constituencies in the fifth round of the national election, a five-year-old "slight" was dredged up by Union Minister Smriti Irani, who is challenging Congress president Rahul Gandhi for the second time in the seat.

"Five years ago, Priyanka Gandhi didn't know my name. Now she keeps taking my name... such an accomplishment," Smriti Irani remarked as she spoke to reporters in Amethi.

She took it a step further: "Nowadays she takes her husband's name less and my name more."

In May 2014, Priyanka Gandhi, asked about Smriti Irani while she was campaigning for brother Rahul in Amethi, had famously said: "Who?"

Smriti Irani had responded then: "If you forget scams done by a family member, why would you remember my name?"

In that election, Smriti Irani lost but drew satisfaction from Rahul Gandhi's much reduced winning margin of around one lakh in a family stronghold he had won since 2004.

This time, the Union Minister upped the ante, staking out mostly in Amethi and accusing Rahul Gandhi of neglecting his constituency. Her attacks intensified after the Congress president decided to contest from a second constituency - Kerala's Wayanad - for the first time.

"You know in Amethi, they call Rahul Gandhi by his full name but they call me didi. This shows my connect in Amethi," she tells reporters.

Even today, she alleged that a hospital in which Rahul Gandhi is a trustee refused free treatment to a poor patient who produced an "Ayushman Bharat card", a central government scheme.

Priyanka Gandhi, on the last day of campaigning for Amethi, lashed back at Smriti Irani. "She came here 16 times and stayed only for four hours. She collects media and distributes shoes. Rahul Gandhi doesn't come here for a few hours. He stays and listens to your problems," she told people at a public meeting. She also accused the central government of blocking Rahul Gandhi's development work in the constituency.