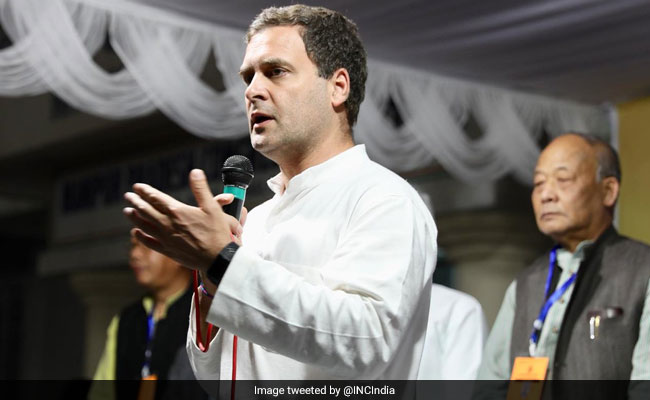 Congress president Rahul Gandhi today launched his party's campaign for the Lok Sabha and assembly polls in Arunachal Pradesh by promising to scrap the controversial Citizenship (Amendment) Bill if voted to power in the state.

Addressing a rally in Itanagar, Mr Gandhi categorically said that his party will not let the Citizenship (Amendment) Bill through. "While the BJP has said that it will bring back the legislation if voted to power, we promise to scrap it if you elect us. We believe in your culture, history and uniqueness, and we will not allow the BJP to attack them with this controversial bill," he added.

The assembly and Lok Sabha elections in the state will be held simultaneously on April 11.

Besides expressing his opposition to the Citizenship (Amendment) Bill, which had resulted in widespread protests across the Northeast over the last few months, Mr Gandhi also promised special category status for Arunachal Pradesh. "This state needs more roads, hospitals, airports and helipads. Congress-led governments in the past gave the special status to all Northeastern states. They had a special place in our hearts. But today, the people of Arunachal Pradesh are not being allowed to make their own decisions. Instead, decisions are being imposed on them from Delhi," he said.

Mr Gandhi then went on to target Prime Minister Narendra Modi over his dream to establish a Congress-free India. "Narendra Modi says that he wants a Congress-mukt Bharat. Look at the hatred he has in his mind and heart," he said.

The Congress, he claimed, has a far more peaceful objective. "We don't want to spread hatred or destroy the BJP and RSS. We want them to enjoy their political space, but we won't allow them to impose their ideology on people," Mr Gandhi added.

The Congress president also slammed PM Modi over the recent terror attack in Jammu and Kashmir. "He speaks on patriotism, but look what he did after the Pulwama attack. We immediately cancelled all events, but Modi was busy shooting in Corbett for over three hours," he added.

Mr Gandhi is on a two-day tour of the Northeast. He will headline two more election rallies - one in Manipur and the other in Tripura - on March 20.