"Getting Views On Polls": Priyanka Gandhi Vadra After Marathon Meetings

When Priyanka Gandhi Vadra was asked about the contest with Prime Minister Narendra Modi, she said Congress president Rahul Gandhi was already engaged in a fight with him. 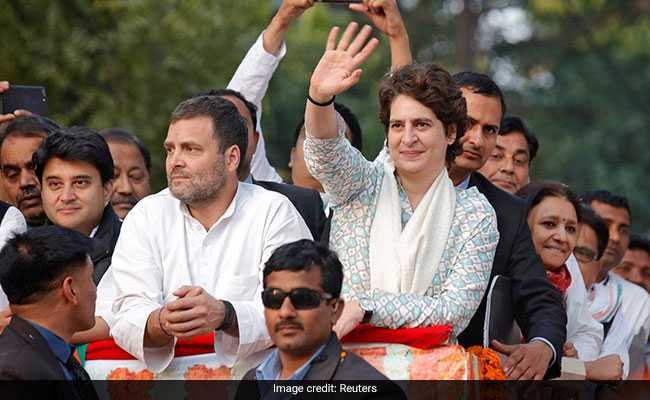 Tasked with reviving the Congress in Uttar Pradesh, party general secretary Priyanka Gandhi Vadra is in an overdrive as she is holding marathon meetings with the workers of the party. She held night-long discussions, took a break for a few hours, and then resumed her talks. She later said that she was getting to learn about the organisation, and she was taking inputs from the workers on the upcoming Lok Sabha elections.

"I am learning a lot about the organisation and how it is structured. I am getting views on how to fight the elections," she was quoted by PTI as saying.

When she was asked about the contest with Prime Minister Narendra Modi, she said Congress president Rahul Gandhi was already engaged in a fight with him.

Priyanka Gandhi Vadra played down the questioning of her husband Robert Vadra by the Enforcement Directorate in Jaipur, in connection with an alleged land scam in Rajasthan's Bikaner district.

"These things will keep on happening, I am doing my own work," she said.

Priyanka Gandhi Vadra joined active politics last month. Mr Gandhi made her in-charge of Uttar Pradesh, along with Madhya Pradesh stalwart Jyotiraditya Scindia. 41 Lok Sabha constituencies out of 80 have been placed under her supervision. Mr Scindia will look after the remaining seats.

Rahul Gandhi, Mr Scindia and Priyanka Gandhi last week took part in a road show in Lucknow. The Congress chief said that the duty of the two leaders would extend to bringing the party in power in the state.

Amethi and Raebareli-- the Congress bastion-- would be looked after by Priyanka Gandhi. She is a popular face in the constituencies, where she had been campaigning for her brother and mother Sonia Gandhi.

On Tuesday, she also met party workers from Amethi. The workers later told PTI that she sought details of the organisation.

"She sought feedback on working of the Congress state unit, district unit, and the units up to the block and booth levels," former state general secretary of Youth Congress Ashok Singh said.

"Priyanka told us that we should take along with us all sections of the society be it the youth, women or the elderly. Now that I have come, I want to see everyone united. Everyone should be ready for 2019 (Lok Sabha elections),"Mr  Singh said.

"When her attention was drawn towards the fact that the BJP and the RSS are going from door to door telling about the achievements of the Modi government, Priyanka said, "I am here. You people stay alert. Now, no one will be able to mislead. Now I will see," he said.

The Congress was in talks with a group of regional parties for a national alliance against the BJP. However, when Mayawati and Akhilesh Yadav announced an alliance in Uttar Pradesh, they snubbed the party.

Soon after, the Congress announced it would contest polls on all 80 seats.

Mr Gandhi has been talking about bringing a change in the state, but is avoiding any direct attack on Akhilesh Yadav and Mayawati.