Rahul Gandhi meekly clasped his hands on the mic and stooped a bit. He continued: "These days, Narendra Modi speaks like this."

Taking a long pull of air and his left hand resting on a pumped up chest, Rahul Gandhi spoke to the mic, "Earlier, Narendra Modi ji used to speak like this, like this." The crowd cheered, as also Priyanka Gandhi, Raj Babbar and Jyotiraditya Scindia who sat behind the Congress president on the stage.

A few seconds later, Rahul Gandhi meekly clasped his hands on the mic and stooped a bit. He continued: "These days, Narendra Modi speaks like this." It ignited the audience again and loud cheers echoed all around the venue.

"Bhaiyo aur beheno, I don't know who Anil Ambani is, I never gave Anil Ambani Rs 20,000 crore..." Rahul Gandhi said, waving his hands apologetically. The Congress accuses PM Modi and his government of wrongdoing in signing a deal with France for buying Rafale fighter jets. The opposition party has also accused the Modi government of favouring businessman Anil Ambani in the deal. 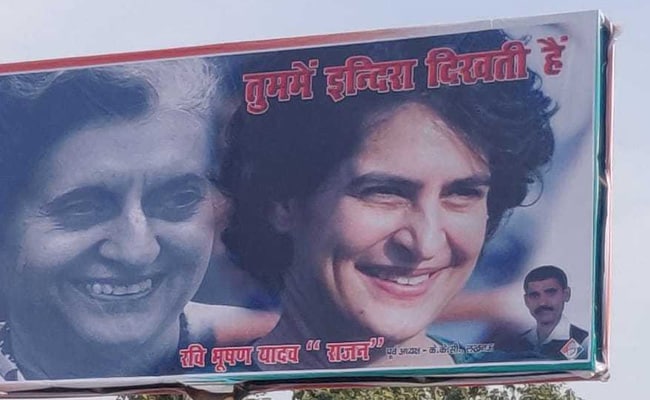 This was not the first time Rahul Gandhi has mimicked PM Modi during a political event.

Last week in Bhopal, the Congress president while addressing party supporters stood straight with both hands firmly on the wooden box where the mic was fixed, and said, "I, a chowkidar with 56-inch chest, will erase corruption." Moments later, stooping behind the mic and shrinking from the stage, he said, "Today, Narendra Modi gives speeches like this." The crowd roared at him.

During the campaign for the assembly elections in Madhya Pradesh in October last year, Rahul Gandhi had said in Morena, using hand gestures, "Mitron (friends), don't make me prime minister, make me chowkidar."

Rahul Gandhi has also been on the receiving side of the mimicry battle.

In November 2013, PM Modi who was then a BJP candidate campaigning for the 2014 national elections, had taken a swipe at Rahul Gandhi by pausing dramatically after a reference to "Shehzada", and pretending to roll up both his sleeves during a rally in Chhattisgarh's Raigarh.

On Monday's event in Lucknow, Rahul Gandhi accompanied his sister Priyanka as her entourage cut through the crowded streets of the Uttar Pradesh capital in a show of strength that was seen as sending a message to the BJP. Priyanka is leading the Congress battle formation in eastern Uttar Pradesh, where the Lok Sabha constituency of PM Modi is located.

The BJP, hoping that the Congress's kick in Uttar Pradesh would go wide, maintains Priyanka Gandhi is not a big threat to its chances in the heartland state where there are 80 Lok Sabha seats.