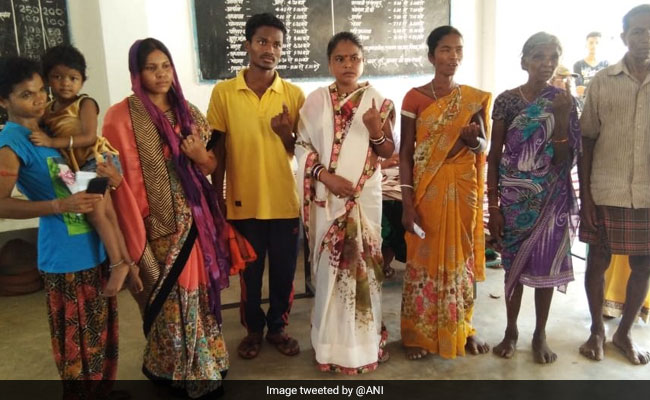 The family of Bhima Mandavi, the BJP lawmaker who was killed by Maoists in Chhattisgarh's Dantewada on Tuesday, voted today in Phase 1 of the Lok Sabha elections from Bastar.

The lawmaker's family members showed their inked finger after they cast their vote from the Bastar constituency.

The dreadful attack, that took place just two days before the national elections, claimed the life of the BJP lawmaker and his four security personnel. He was traveling in a bullet-proof vehicle, which was blown up in an improvised explosive device (IED) blast in the Maoist-affected region. The Maoists, who were hiding nearby, started shooting when the people in the two other cars tried to come out.

The Election Commission, in a press briefing today, said they had taken special security measures after the attack. In Bastar, 77% polling was recorded at the booth where the attack took place.

Ahead of every election, Maoists warn locals against voting. Posters bearing the message are usually put up in public areas.

Ahead of last year's assembly polls, two policemen and a cameraperson of national broadcaster Doordarshan were killed in Dantewada in October.

State police chief DM Awasthi told NDTV that Bhima Mandavi was repeatedly warned against travelling on the road as it was not sanitised.

"The police called him up and made two attempts to convince him. He did not listen and said that he knew the area," the police chief said.

Bastar was the only Chhattisgarh constituency to vote today. Elections will also be held in the state in two other phases, on April 18 and 23.