PK Biju takes on Remya Haridas The Alathur Lok Sabha constituency has been a Left bastion since its formation in 2009.

Remya Haridas is the Congress candidate from Kerala's Alathur constituency.

As she steps out of a temple, Remya Haridas sings a traditional folk song for voters. "I want to tell you all that I will never forget the journey I undertook. You can trust me. I will be with you," she tells voters after the song is done.

Despite hailing from Kozhikode, the 32-year-old woman is contesting from the reserved Lok Sabha constituency of Alathur, predominantly carved out of Kerala's Palakkad. Her father - a daily wage labourer - belongs to the scheduled caste, and her mother is also an active Congress leader.

Remya Haridas is currently the block panchayat president of Kunnamangalam, which is considered as a Left-dominated area. She was one of the many leaders handpicked by Rahul Gandhi through a talent hunt in 2011.

So, why should the people vote for her? "I want to be with the people when they need me. I want to provide for them, no matter what their needs are," she says. "I got to know only through news reports that I have been made a candidate. Maybe it's because of the work I did in the panchayat that the party trusted me enough for this role."

The people, for their part, seem pleased with her. Wherever Remya Haridas goes, they respond with smiles and a friendly wave of hands. 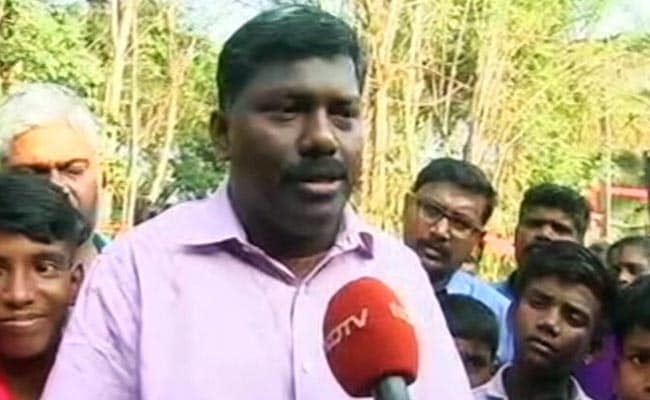 At a time when parents were too scared to let their daughters out, my mother encouraged me and ensured that I attended various camps. We used to live in a thatched hut back then, and even now, we reside in a house provided by the government," Remya Haridas recalls of the years she spent growing up.

At the other end of the constituency, elderly women have spent around an hour waiting for two-time sitting parliamentarian PK Biju to arrive as part of his campaign. But keeping them engaged is a mobile projector that showcases the lawmaker's achievements over the years. PK Biju has a track record that's consistently above the national average of attendance in Parliament, besides the national average of questions raised.

A 45-year-old scheduled caste member of the Left Front who hails from a family of agricultural labourers, he had completed his PhD in 2017. "Well-wishers chipped in when his parents couldn't afford to pay for his education, even his pre-degree classes. Incidentally, it was there that he was introduced to the Student Federation of India, the youth wing of the Communist Party of India," a person close to the Lok Sabha candidate said.

At his rallies, PK Biju reminds people of the work he has done and talks of the continued need for a strong representative in the Lok Sabha. "I have three priorities in this election campaign. One: I am against the BJP's narrative in national politics and their Hindutva agenda. We can't allow such a government to remain. Two: I have carried out development work worth Rs 2,200 crore for the people in the last 10 years, and I need to continue that. Three: The Left Front government has introduced several welfare schemes in the state. That has to go on too," he told NDTV.

The Alathur Lok Sabha constituency has been a Left bastion since its formation in 2009. The battle there is primarily between the Congress and Left parties.