AAP's Atishi claims that he possesses voter ID cards from Rajendra Nagar as well as Karol Bagh, both of which come under the Central Delhi parliamentary seat. 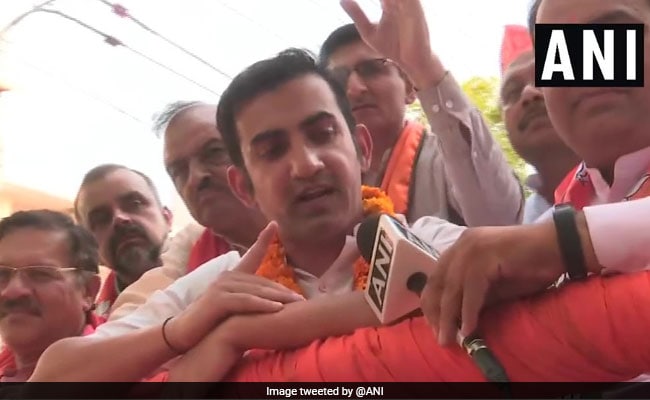 Gautam Gambhir said he only has a Voter ID card from Rajendra Nagar.

BJP candidate Gautam Gambhir today rejected allegations by the Aam Aadmi Party (AAP) that he is a registered voter at two different places in Delhi, saying that he only has a single voter identity card from Rajendra Nagar.

Atishi, the AAP candidate contesting against Gautam Gambhir in the East Delhi Lok Sabha constituency, has filed a court petition seeking his disqualification. The clarification comes a day ahead of the first hearing on May 1.

"I have only one voter ID from Rajendra Nagar. I don't have any other voter ID," news agency ANI quoted the former cricketer as saying in response to Atishi's claim that he possesses voter ID cards from Rajendra Nagar as well as Karol Bagh -- both of which come under the Central Delhi parliamentary seat.

The BJP candidate had spoken out against Atishi's allegations on earlier occasions too, but not in as many words. Two days ago, he claimed that AAP was engaging in "negative politics" because it lacks direction. "When you don't have vision and have done nothing in the last 4.5 years, you make such allegations. The Election Commission will decide this. When you have vision, you don't involve yourself in such negative politics," he said.

Atishi countered the attack by listing welfare programmes initiated by the AAP government in Delhi, and challenged Gautam Gambhir to elaborate on his vision for the constituency instead. "What did you do for East Delhi in five years that made the BJP give you a ticket?" she asked. The AAP candidate also questioned the achievements of Maheish Girri, who had won from East Delhi in 2014 on a BJP ticket but has now stepped aside in favour of the former cricketer.

The AAP candidate warned Gautam Gambhir of the legal consequences of not coming clean on the matter. "Under Section 17, read with Section 31, false declaration in the matter of electoral rolls is punishable with jail time of up to one year," she tweeted, using the hashtag #GambhirApradh.

Gautam Gambhir is facing problems on other fronts too. The Election Commission today sent him a showcause notice for allegedly violating the Model Code of Conduct by appearing in an advertisement on a national daily. The advertisement for a cricket game application -- CricPlay -- had come out on April 26.

East Delhi will vote with other constituencies across the national capital on May 12. The results will be declared on May 23.