Lok Sabha Elections: The Ministry of Information and Broadcasting's Press Information Bureau this time has chosen to send out a message to voters with a pinch of humour to grab their attention. 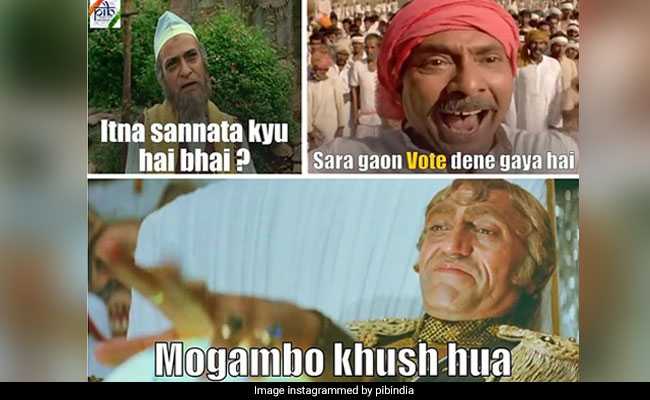 In this meme, PIB has used scenes from iconic movies - "Sholay" and "Mr India"

"Every vote matters" is a message that the Election Commission and political leaders often repeat to make people realise the importance of voting in the world's largest democracy.

But the Ministry of Information and Broadcasting's Press Information Bureau this time has chosen to send out a message to voters with a pinch of humour to grab their attention.

Popular Bollywood dialogues and characters from Hollywood movies have been used in hilarious memes and shared on PIB's Instagram account to make an appeal to the citizens to step out and vote.

A collage of characters from superhero movie "Avengers: Endgame" reminds people why "Every vote counts in democracy".

#Voting determines our future. Each of us must decide for ourselves what that should look like. There is no such thing as a vote that doesn't matter. Go vote... #ItMatters Credits: @MarvelStudios #LokSabhaElections2019 #NoVoterToBeLeftBehind #AvengersEndgame #Thanos #IronMan #tonystark #captainmarvel #captainamerica #thor #Avengers #MarvelStudios #marvelmemes #marvellegends #marvelcenematicuniverse #InstaGood #instaMarvel #thanos #dontspoiltheendgame

A meme shared last week, based on the popular song from Aamir Khan-Rani Mukherjee starrer "Ghulam", addresses the reluctance among people to vote. In the meme on "Aati Kya Khandala", a chartbuster from the late 90s, Rani Mukherjee can be seen asking Aamir why she should vote and Aamir replies saying she should cast her vote for the sake of her future and also because it's her duty.

To vote or not to vote is not a question for a responsible citizen Are you? Exercise your right, fulfil your duty Go Out and vote... #Itmatters #india #VotingRound6 #Phase6 #DelhiVotes #delhivotekar #LokSabhaElections2019 #instapost #instagram #phase6 #VotingRound6 #gooutandvote

Other popular Bollywood movies that have been featured in the memes are "Lagaan", "Border" and the recent movie starring Ranveer Singh, "Gully Boy".

In some of the posts, scenes from fantasy series "Game of Thrones" have been put together to tell people why they may regret not casting their vote. The final season of the fantasy series began around the same when the seven-phased national elections began. The national elections began on April 11 while the first episode of season eight of Game of Thrones aired on April 15.

The final round of the seven-phased mega polls is being held today in 59 seats across seven states and one union territory. The votes will be counted on May 23.