Emphasising that Jammu and Kashmir is an integral part of India, the Defence Minister slammed those who criticised BJP's promise in its manifesto for the abrogation of Article 370 and Article 35A. 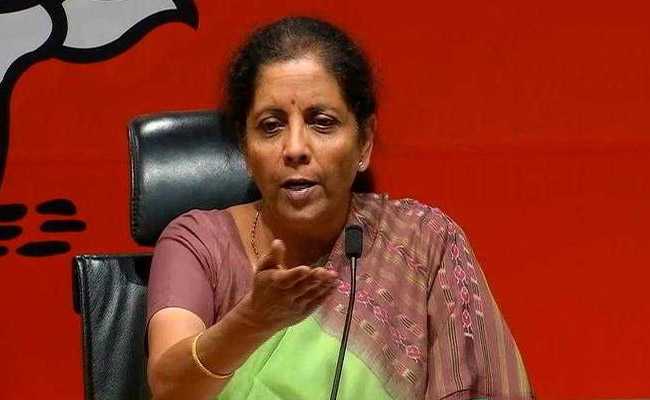 Nirmala Sitharaman said BJP is in favour of resolving the case at the "earliest" to end the "stalemate".

Defence Minister Nirmala Sitharaman on Tuesday slammed the Congress for calling BJP's manifesto a 'jumla' and asked the party to clarify its stand on Ram Janmabhoomi-Babri Masjid land dispute case.

She said that BJP is in favour of resolving the case at the "earliest" to end the "stalemate".

"Can anyone deny that Ram temple issue is still in Supreme Court? We have issued a request and we have even gone to the court to say, 'will you please leave those pieces of land around the disputed area so that other work can start'. In our manifesto, we have said that at the earliest we will try and tap all avenues to make sure the solution is reached for this matter," Ms Sitharaman told news agency ANI.

"I want to ask Congress party, what is it that they wanted to do on these issues? Did they want to continue the stalemate? Are they wanting to say that they are not interested in Ram Mandir? What is the position of the Congress party? Instead of calling others (manifesto) jumla, let them come out actively and proactively to say whether they are in favour of the temple or not?" she added.

Calling West Bengal Chief Minister Mamata Banerjee a "bad clone" of the Communist party, Ms Sitharaman said, "Mamata Banerjee is not just frustrated but also scared of the support BJP is gaining in West Bengal. It is clearly visible, and people are so eagerly coming up against her rule."

Emphasising that Jammu and Kashmir is an integral part of India, the Defence Minister slammed those who criticised BJP's promise in its manifesto for the abrogation of Article 370 and Article 35A.

Ms Sitharaman said, "We have to look into the way in which integration of Jammu and Kashmir can happen effectively and for this, discussions are welcome but no such language will be encouraged."