Samajwadi Party President Akhilesh Yadav, at whose meeting the bull had made his entry, said the animal came to air its grievances. 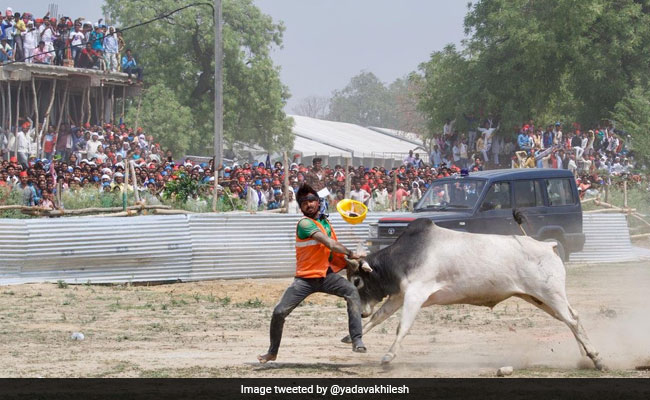 Akhilesh Yadav posted a video clip of the episode and tweeted, "Poor guy came to the wrong place again"

A stray bull that ventured into a Mahagathbandhan rally a few days ago has provided fodder to the alliance- BJP battle in Uttar Pradesh. At a rally today, Chief Minister Yogi Adityanath said even cattle "are unwilling to forgive the criminals".

"I was recently in Kannauj where the people told me a bull had entered the venue of 'gathbandhan' rally, probably to find out which of the slaughterhouse operators were there and to treat them accordingly," the Chief Minister was quoted as saying by news agency ANI.

"I prayed to the bull to keep doing his job while we take care of the ones who mistreat the poor, put roadblocks in the state's development and have forced the youth to leave the state," he added while speaking said at an election rally in Shahjahanpur.

Samajwadi chief Akhilesh Yadav, at whose meeting the bull had made his entry, said the animal came to air its grievances.

"It (the bull) may have thought a helicopter from Hardoi is coming... It had come with its own set of complaints," Mr Yadav said, leaving the audience in splits.

Later, he tweeted a video clip of the episode, with another dig at the ruling party.

"This bull is going around with a message from animals and farmers. Poor guy came to the wrong place again. Had to go to Tirwa, but landed up in Chhibramau," his message in Hindi read.

Other footage from the area showed the running bull had scared the people, whose hurry to find the exit almost led to a stampede. A man trying to control the animal got gored.

The police had to use batons to restore order.

Uttar Pradesh is one of the states where stray cattle have allegedly become a menace due to the ban on slaughter and a shortage of cow shelters.

Priyanka Gandhi Vadra - the Congress general secretary in charge of eastern Uttar Pradesh - has said she has been getting repeated complaints from farmers.

At a rally in Amethi today, she said, "The menace of stray animals is very much here and the farmers are forced to keep a watch on their crops during night".