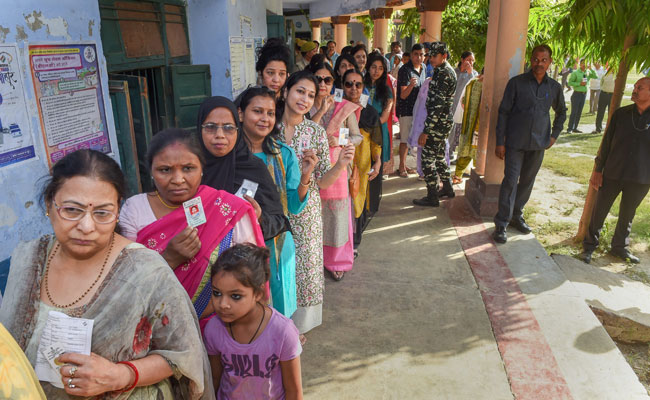 Polling on these seats was 2.17 per cent more as compared to 2014 poll, Chief Electoral Officer (CEO) HR Srinivasa said.

Polling passed off peacefully with no incidents of any violence and poll boycott reported from any of the five lok sabha constituencies, the CEO said.

Except for Sitamarhi, the rest four seats were won by the NDA in the 2014 election.

Sitamarhi from where RLSP of former union minister Upendra Kushwaha candidate had won last time has gone to RJD's Arjun Rai in the current election.

The RJD supremo has himself represented the Saran seats a number of times in the past.

Madhubani is witnessing a triangular contest between BJP, VIP and rebel Congress leader Shakeel Ahmad. Ahmad is in fray despite a mahagathbandhan candidate Badrinath Purve of fledgling Vikassheel Insaan Party (VIP) in the field. Congress has suspended Ahmad.

Altogether 87,66,722 voters exercised their franchise on 8899 polling stations in the five Lok Sabha constituencies to decide the fate of h 82 candidates including six women, the CEO said.

A total of 29 people were arrested as a preventive measure during polling today, Mr Srinivasa said.

The repolling was held today at polling stations number 339 and 340 under Lakhisarai assembly segment of Munger lok sabha constituency, the CEO said adding that 52.52 per cent of voting was recorded at these two polling stations.

Earlier in the day, acting on the basis of inquiry report, Chief Electoral officer (CEO), Bihar suspended 20 poll personnel in connection with electoral malpractice that took place on the above mentioned two polling stations of Munger lok sabha constituency during the fourth phase of polling on April 29 last.

Departmental action has been initiated against these personnel apart from lodging FIR against 10 of them, he said.

The Commission has initiated action on the basis of a probe report into the incident of bogus voting and thrashing of a journalist at polling station number 339 and 340 of Lakhisarai assembly constituency of Munger lok sabha constituency.