Lok Sabha Elections 2019: Australian High Commissioner to India Harinder Sidhu said witnessing the exercise was an inspiring experience and added that she was impressed with the use of Electronic Voting Machines (EVMs). 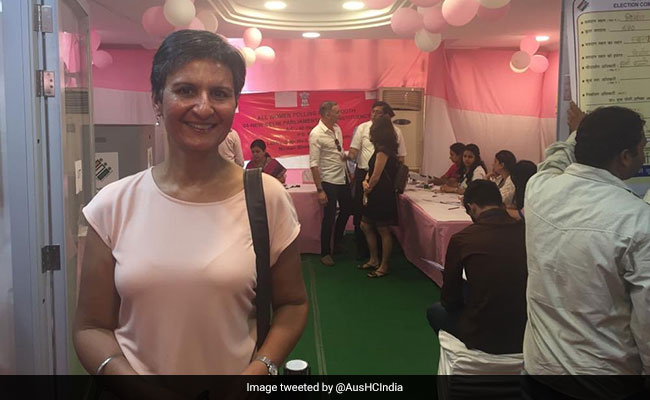 "We do not have those (EVMs) in Australia," said Harinder Sidhu, Australian High Commissioner to India

The Australian High Commissioner to India, who is in Delhi to observe the 2019 Lok Sabha elections, praised the Election Commission for a "well-organised and orderly" election as 59 seats voted on Sunday. Harinder Sidhu said witnessing the exercise was an inspiring experience and added that she was impressed with the use of Electronic Voting Machines (EVMs).

"It has been a really inspiring experience to see the world largest democracy go to polls... How can India get so many people to vote? Answer is well-organised Election Commission. It is a good system, orderly, organised and efficient," Harinder Sidhu told ANI at a polling booth in the national capital.

Ms Sidhu opined that use of EVMs in the national elections signifies the "high quality of Indian democracy".

"I am really impressed with EVMs, we do not have those in Australia. I think even with paper ballots which we have in Australia, it is always a case where there is a risk to integrity in any system. VVPAT is actually a good development," she said.

The paper trail machine or VVPAT is a device which dispenses a slip with the symbol of the party for which a person has voted. It is the first time the Election Commission has used VVPAT in the elections.

The sixth round of seven-phased elections is being held across 59 Lok Sabha seats today with 979 candidates in the race to the parliament.

The seventh and last phase of the elections will be held on May 19 and counting of votes will take place on May 23.