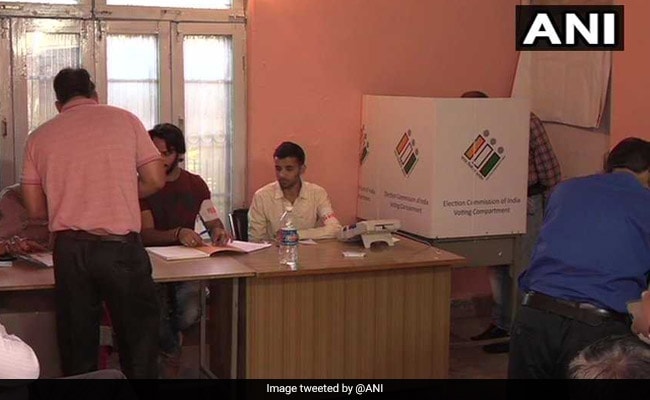 A special polling station set up in Udhampur, for Anantnag parliamentary constituency.

Jammu and Kashmir's Anantnag constituency, which is creating a record of sorts by voting in three separate phases, has witnessed the minimum voting so far. The constituency, where the first phase of elections is being held today, showed 4.7 per cent voting till 11 am. The low figures pushed National Conference chief Omar Abdullah to issue a Twitter appeal.

"To the voters of Anantnag, please don't reward the death, destruction & deceit of the last 4 years by staying home & boycotting the election. Come out & vote to give your anger a voice. Vote for the best candidate in the field, vote for @masoodi_hasnain," read Mr Abdullah's post.

The retired judge of the Jammu and Kashmir High Court is known for his landmark judgement on Article 370 of October 2015, in which he said the Article, which gives Jammu and Kashmir its special status along with Article 35A, "though titled as 'Temporary Provision'" has "assumed place of permanence in the Constitution".

Anantnag became the first constituency in India's electoral history to have elections in three phases - today is the first phase. The Election Commission said the schedule was made keeping in mind the security situation in the constituency, which is spread across four districts of terror-hit south Kashmir.

More than 300 companies (30,000 personnel) of security forces have been deployed for today's polling, which has been peaceful so far, officials said.

US Won't Back Off Plan For TikTok Download Ban: Court Filing