"An Honour If PM Asks Me To Fight Against Sonia Gandhi", Says Ex-Soldier

A former special forces officer of the Army, Major Surendra Poonia said the leadership quality of Prime Minister Narendra Modi inspired him to join the BJP 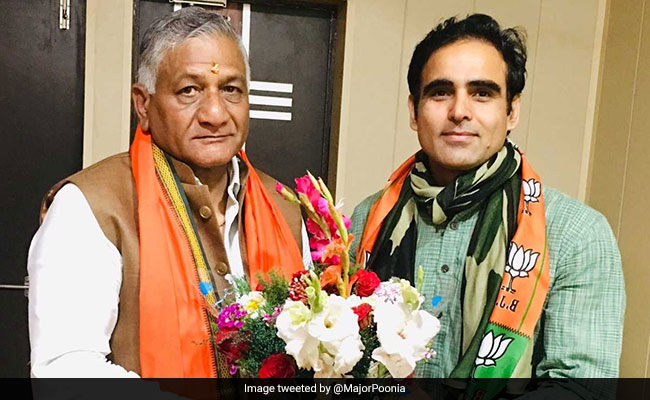 A former Army special forces soldier who recently joined the BJP said he is willing to take on UPA chairperson Sonia Gandhi from her Lok Sabha constituency Raebareli in the national elections.

The BJP is looking for popular candidates to give a tough fight to the Gandhis. Raebareli is Sonia Gandhi's stronghold as she has won four consecutive times from there since 2004.

"It would be an honour for me if Narendra Modi ji asks me to fight against Sonia Gandhi from Raebareli constituency. I will happily take this task. This will be a fight between chowkidar (watchman) and chor (thief)," Major Surendra Poonia told news agency ANI on Wednesday.

A former special forces officer of the Army, Major Poonia said the leadership quality of Prime Minister Narendra Modi inspired him to join the BJP.

"He has always kept nationalism and national security first. He has immense respect for security forces. He has worked for needy people, youth and security forces; hence, I joined the party to serve the country," said Major Poonia who joined the BJP in the presence of BJP general secretary JP Nadda and senior leader Ram Lal a day after former cricketer Gautam Gambhir also joined the party.

Major Poonia is a recipient of the Vishisht Seva Medal, which recognises "distinguished service of an exceptional order". He contested the 2014 national elections from Sikar in Rajasthan.

Congress president Rahul Gandhi will contest from Amethi. Amethi and Raebareli are the only seats the Congress had retained in the 80-seat Uttar Pradesh when they were decimated by the BJP in the 2014 general elections.

The Congress earlier this month announced that it will contest all 80 seats in Uttar Pradesh after the Samajwadi Party of Akhilesh Yadav and Mayawati's Bahujan Samaj Party announced a grand alliance in January without the party. The rivals-turned-partners made one concession for the Congress; they said they would not field candidates in Amethi and Raebareli.