Akshay Kumar To Engage In "Non-Political" Conversation With PM Modi

Lok Sabha Elections 2019: Akshay Kumar took to Twitter to announce that his conversation with PM Narendra Modi will be a "breather" in election time. 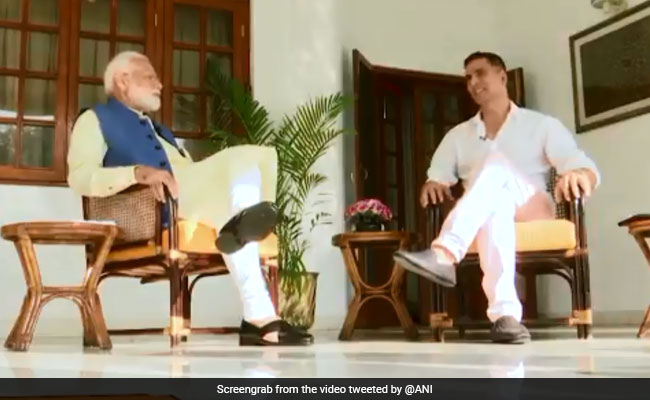 A day after Akshay Kumar said he would be getting into an "unknown and uncharted territory" with something he had not done before, the Bollywood actor Tuesday said he will have a "candid and completely non-political" chat with Prime Minister Narendra Modi on Wednesday.

The 51-year-old star took to Twitter to announce that his conversation with the prime minister will be a "breather" in election time.

"While the whole country is talking elections and politics, here's a breather. Privileged to have done this candid and COMPLETELY NON POLITICAL freewheeling conversation with our PM @narendramodi," Kumar wrote on the microblogging site.

PM Modi replied to the tweet, saying, "Dear @akshaykumar, it was good talking to you about everything, except politics and elections :) I'm sure people would like watching our conversation."

Do you ever wonder whether PM Modi manages to laugh during the heat of the election campaign? You'll get the answer tomorrow at 9am @ANI, in an informal and non-political conversation that I got the chance to do with @narendramodi ji. Do watch! pic.twitter.com/pczNar7k3A

"Getting into an unknown and uncharted territory today. Doing something I have never done before. Excited and nervous both. Stay tuned for updates," said the actor Monday, who has starred in a series of patriotic and social issue-driven films in recent years.

Hours after the cryptic tweet sparked speculation that he would be taking a political plunge Monday, he dispelled the rumours, saying "Grateful for all the interest shown in my previous tweet but just clarifying in light of some wild speculation, I am not contesting elections."

Recently, Mr Kumar has featured in films like "Padman" and "Toilet: Ek Prem Katha" has also featured in government ads on issues such as menstrual hygiene, anti-smoking and traffic safety rules.

The National Award-winning actor said the interview will air on the Twitter account of news agency ANI at 9 am Wednesday, in which the viewers will discover "some lesser known facts" about PM Modi.