Trends emerging on counting day showed the BJP surging ahead in all of Delhi's seven parliamentary, defeating Arvind Kejriwal's AAP as well as the Congress. 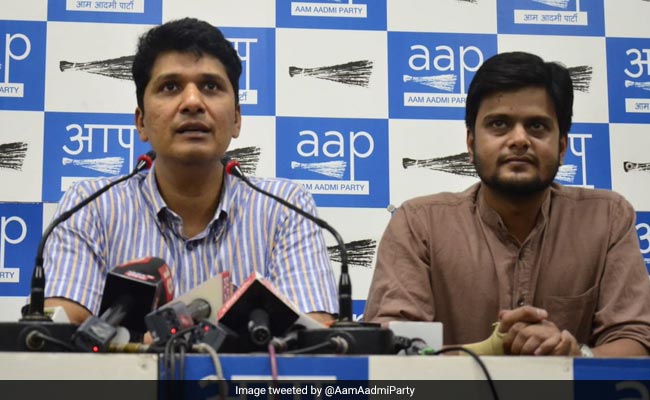 The Aam Aadmi Party (AAP) today complimented Prime Minister Narendra Modi on the BJP's electoral gains in Delhi, but dismissed claims that it was a reflection of the people's disillusionment with the Arvind Kejriwal-led Delhi government.

"People take different parameters into consideration when they vote in the Lok Sabha and assembly elections. We expect the people to judge on the basis of our development work when the city goes to vote next year," AAP spokesperson Saurabh Bhardwaj said at a press conference held as results of the Lok Sabha elections continued to trickle in on Thursday.

Trends emerging on counting day showed the BJP surging ahead in all of Delhi's seven parliamentary, defeating Arvind Kejriwal's AAP as well as the Congress. Even star politicians such as former Chief Minister Sheila Dikshit and AAP's Atishi seemed set to fall on what clearly seemed like the Narendra Modi-led BJP's day under the sun.

Mr Bhardwaj conceded his party's defeat at the press conference. "In a democracy like India's, the mandate of the people is considered very sacred. We respect the mandate of India and congratulate the BJP for its victory. We also extend our warm wishes to Narendra Modi for being re-elected as the Prime Minister of India. We offer him our best wishes for his future tenure as the Prime Minister of India," he said.

The AAP leader refused to comment on the reason for the BJP seemingly returning with an even higher mandate than 2014, saying that he would prefer not to raise questions regarding the election results on that particular occasion. "Today, we just want to compliment the BJP and Prime Minister Narendra Modi. We also hope that the centre will cooperate with the Delhi government for the welfare of its people. This is the only hope we have for the future," he said.

As the results continued coming in, BJP state chief Manoj Tiwari seemed to be emerging victorious in a battle with former chief minister Sheila Dikshit in Northeast Delhi. In East Delhi, cricketer-turned-BJP candidate Gautam Gambhir seemed to have the upper hand against AAP's Atishi. Hans Raj Hans, Punjabi folk singer and BJP candidate from North West Delhi, was leading against AAP's Gugan Singh and the Congress' Rajesh Lilothia. While BJP candidate Meenakshi Lekhi looked set to win against the Congress'Ajay Maken and AAP's Brijesh Goyal in New Delhi constituency, its Ramesh Bidhuri was leading over AAP's Raghav Chadha and the Congress'Vijender Singh in South Delhi.