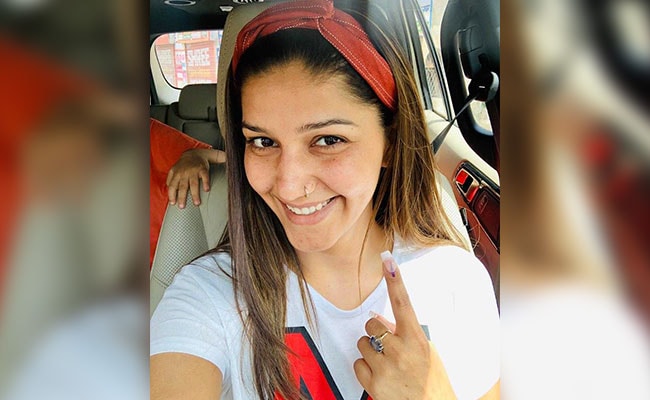 Actor-dancer Sapna Chaudhary on Sunday exercised her right to vote in Delhi in the pen-ultimate round of the ongoing national election. The performer, widely followed in north India, later flaunted her inked finger to the cameras.

Last month, Sapna Chaudhary inspired headlines as her photo with Congress's Priyanka Gandhi Vadra circulated on social media. There was also talk about the Congress fielding her as its candidate from Uttar Pradesh's Mathura, against the BJP's Hema Malini.

Sapna Chaudhary then called a press conference and denied all speculation of joining the Congress, calling the photo an old one. She also said she had met Priyanka Gandhi several times and though she was "very good", she had no plans of campaigning for the party.

She surprised with her presence at the roadshow organised by BJP's Manoj Tiwari when he filed his nomination to contest from North East Delhi in the national election.

Like she had denied joining the Congress, the former Bigg Boss star and Haryana performer rejected the suggestion that she had joined the BJP.

"I have not joined the party (BJP), I'm here because Manoj Tiwari ji is a good friend of mine," Sapna Chaudhary had said.