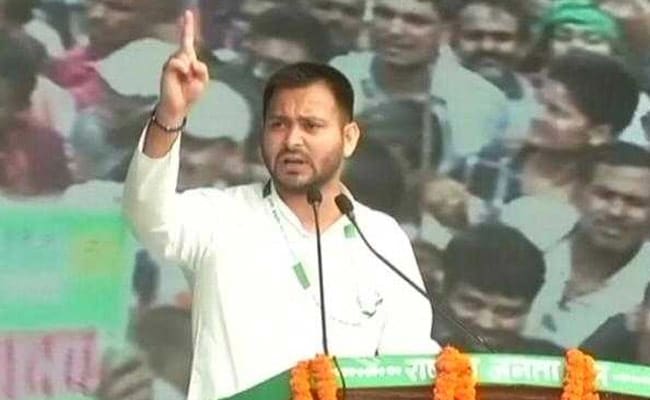 Bihar's 1900-crore Srijan scam has provided fodder for the ongoing war of words between the Congress-Lalu Yadav alliance and the BJP. As Sushil Modi - the deputy of Chief Minister Nitish Kumar -- announced that he would file a defamation suit against Rahul Gandhi for his comment connecting "all thieves" and the surname Modi, Tejashwi Yadav weighed in with a small reminder.

"Srijan ka chor" declared the younger Yadav, who, last June came up with a big "expose" claiming Sushil Modi and Nitish Kumar had been the beneficiaries of the Srijan scam. The corruption case involves siphoning of government funds by the Srijan Mahila Vikas Sahyog Samiti Ltd.

Speaking to reporters at Patna airport ahead of campaigning, Mr Yadav dared the state BJP chief to file as many cases as he wanted and insisted nothing would stop him proving the Deputy Chief Minister's role in the scam.

Sushil Modi has yet to respond to the statement, but he has denied having any link to the scandal or to his cousin Rekha Modi, who is one of the scam's alleged beneficiaries.

Tejashwi Yadav has also alleged that Priya Kumar, the daughter-in-law of the NGO's founder Manorama Devi, and her husband are still at large, alleging that such a situation would not have been possible without the aid of the Chief Minister and his deputy.

Tejashwi Yadav and his party have been extremely vocal about the Srijan scam, citing it as a an example of the corruption during the rule of Nitish Kumar and Sushil Modi's role in it. Their allegations agains the Chief Minister -- once dubbed the "Sushashan babu (Mr Good Governance) - have grown sharper in the run up to the national elections.

It was Sushil Modi's one "expose" a day on alleged corruptions of the Lalu Yadav family that gave Nitish Kumar cause to end the Grand Alliance. Sushil Modi had also been unrelenting in his accusations against Tejashwi Yadav, then the Deputy Chief Minister, in the Patna land scam.

The Srijan scam involves the Srijan Mahila Vikas Sahyog Samiti Ltd, a non-profit organization based in Bihar's Bhagalpur district, that was set up in 1996 as a small-scale self-help group for women. Over the two decades since, the NGO reportedly siphoned funds meant for government welfare schemes. It has given the RJD a valuable weapon to use against the BJP-JD(U) alliance in Bihar.

Bhagalpur district, where the NGO is based, is going to the polls on April 18 and the RJD is keen to ensure it retains the seat won in 2014.