In the narrow lanes of Uttar Pradesh's Mathura, Hema Malini waves at people from the sunroof of a gleaming, dark Mercedes SUV. A man sticks out of the backseat window, holding an umbrella over the BJP candidate as the car covered with pink rose petals glides through the cramped quarters, tailed by a long convoy.

The actor-politician, wearing dark glasses as additional protection from the blazing April sun, holds a faux lotus -- the symbol of her party BJP -- in one hand and a mic in the other. The umbrella follows when Hema Malini leaves the Mercedes-Benz GLE to meet people.

Hema Malini is seeking re-election from Mathura, a largely rural constituency where she defeated Rashtriya Lok Dal (RLD) candidate Jayant Chaudhary in 2014 by over three lakh votes. Countering voters who claim they hardly saw their celebrity lawmaker in the past five years, the 70-year-old asserts that she made "250 visits" to her constituency. 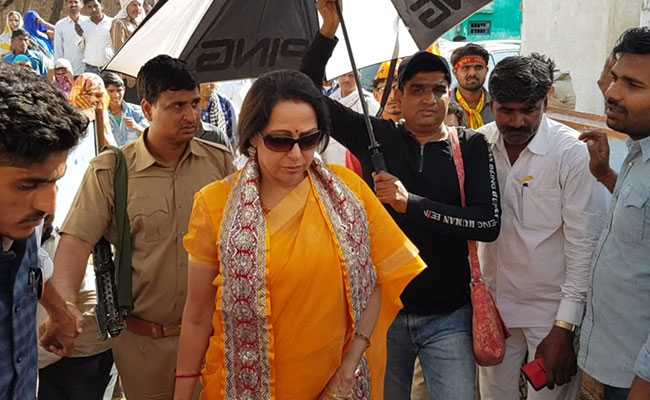 Taking sips of a cooling drink during a pit-stop, she speaks to NDTV. How does it compare with film shoots? "That is also tough and this is also tough. It is not a bed of roses. One has to work hard to get something."

Hema Malini says she is proud of her work in the constituency. "I have spent crores on roads. It is not possible to satisfy everyone...Some places Congress neglected. When I see people in difficulty, I get tears in my eyes," she says.

Photos of Hema Malini's campaign have caused much buzz on social media. One has her stepping out of a helicopter near a field and another has her on a field, joining women in cutting the crop with a sickle and carrying bundles. The pictures were greeted with a mix of amusement, scorn and even praise. "Good acting," said some in the opposition.

"I am an actress, a celebrity. I don't see this in Mumbai. When I go to the villages, I like that environment and I like it. Even if I acted, it was fun. What is wrong with it? Everybody was happy to see the picture back in Mumbai. Dharmendra-ji (her husband) was very happy and said it looked beautiful."

The Congress has fielded newcomer Mahesh Pathak while the SP-BSP alliance has put up Kunwar Narendra Singh against Hema Malini. Narendra Singh's brother Manvendra Singh - a past lawmaker from the constituency -- joined the BJP recently.

She rubbishes her rivals' campaign that Mathura should reject an "outsider MP".

"Was I sleeping for five years? I have a house in Brindavan. It is a big thing," said the actor popular among her fans as "Dream Girl" in the 1970s.

The seat was with the BJP from 1991 to 2004. Manvendra Singh won in 2004 as a Congress candidate. In the next election, Jayant Chaudhary won. He was defeated by Hema Malini in 2014.

Mathura will vote on April 18 in the national election starting next week. The results will be declared on May 23.