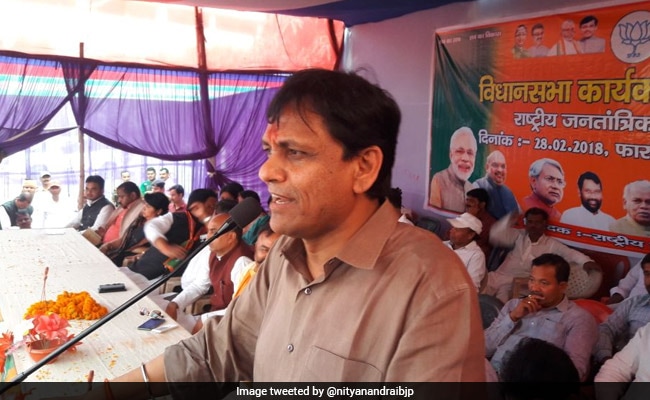 BJP's Bihar unit chief Nityanand Rai, who is on a mission to pacify sulking party leaders, on Thursday found him surrounded with supporters of a BJP lawmaker, who was denied a ticket from Katihar Lok Sabha constituency for the April-May national election.

Mr Rai had gone to meet Member of Legislative Assembly (MLC) Ashok Kumar Agarwal, who has filed his nomination as an independent after the Katihar ticket was given to JDU's candidate Dulal Chandra Goswami.

After the meeting, Mr Rai was heckled outside Mr Agarwal's house by his supporters, who shouted slogans against the BJP leader. After the police's intervention, Mr Rai jostled his way to his vehicle.

The BJP is contesting in 17 out of 40 seats in Bihar, as per the seat-sharing agreement with the JDU, which is contesting an equal number of seats.

Sources have told NDTV that Mr Rai had gone to mollify the rebel leader on JDU chief Nitish Kumar's insistence.

The BJP had won the seat three times--1999, 2004 and 2009-- with support of the JDU. In 2014, when Nitish Kumar went it alone, the three-time BJP lawmaker Nikhil Kumar Choudhary finished the runner-up while Tariq Anwar, then with Sharad Pawar's NCP, won the election.

After the meeting with Mr Rai, Mr Agarwal said that the time for sulking was and cajoling was over, making clear his intentions to contest the poll as an independent.

Katihar is not the only constituency where the BJP is facing rebellion. In Banka, former parliamentarian Putul Kumari has filed her nomination as an independent candidate.

The party on Wednesday managed to pacify Union Minister Giriraj Singh, who was upset over being shunted out of his constituency, Nawada, from where the Lok Janshakti Party is contesting. He is contesting from Begusarai, where he will take on Left's Kanhaiya Kumar. Today, he met Chief Minister Nitish Kumar but avoided leaders of his party.