Woman MPs "Manhandled": Congress After Clash With Marshals In Parliament

Congress members clashed with Lok Sabha Marshals today after Speaker Om Birla ordered the forcible removal of two Congress MPs amid vociferous protests over the chaotic situation in Maharashtra. The fracas, which led to the Lok Sabha being adjourned for the day and the Rajya Sabha till 2 pm Tuesday, drew sharp remarks from Congress President Sonia Gandhi, who alleged that women members of her party had been manhandled. The Congress's leader in the Lok Sabha, Adhir Ranjan Chowdhury, made similar allegations. "We have never experienced this inside parliament. We will be waiting to see what action is been taken against responsible people," he said.

Union Ministers Rajnath Singh, Ravi Shankar Prasad and Pralhad Joshi countered these claims in their meeting with the Speaker and demanded strict action against both parliamentarians. "The House cannot be place of unruly behaviour. All parties should maintain sanctity and great traditions of Lok Sabha," Ravi Shankar Prasad said after the incident.

The Speaker declared the behaviour "unacceptable" and said: "I am hurt by whatever happened in Parliament today. It is unacceptable and won''t be tolerated". Sources said Mr Birla is contemplating strong action against the two Congress MPs.

Earlier today a group of Congress MPs stormed the Well of the Lok Sabha and approached Speaker Om Birla carrying banners and chanting slogans that demanded "murder of democracy" in Maharashtra be stopped. Mr Birla, attempting to restore order, directed the removal of the banners and TN Prathapan and Hibi Eden.

Congress MPs refused to do so and protested their colleagues' removal, leading to clashes with Lok Sabha marshals. In the scuffle that followed two women Congress MPs - Tamil Nadu's Jothimani and Kerala's Ramya Haridas - were allegedly manhandled.

"It is sad that Ramya Haridas and me were manhandled, we have lodged complaint with the speaker," Jothimani told reporters. 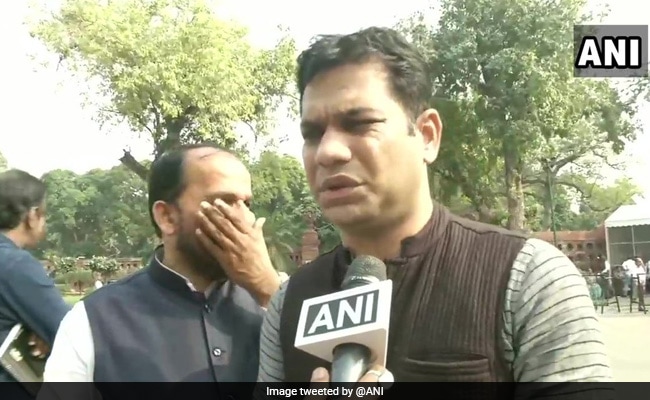 Hibi Eden, also from Kerala, said the Congress had raised "a very genuine issue and protested in democratic manner".

"Unfortunately we were taken out by Marshals who tried to push us forcefully. They tried to get banners from us and our colleagues tried to resist it. Our women colleagues were manhandled too. We've filed complaint with the Speaker," Mr Eden said.

Shortly before the Lok Sabha was adjourned Congress leader Rahul Gandhi said that although he wanted to question the centre over the Maharashtra issue, "it doesn't make any sense" to do so.

Earlier Mrs Gandhi led a large gathering of Congress leaders and party workers in a protest outside parliament building. Standing in front of the statue of Mahatma Gandhi, protesters carried banners and shouted slogans like "Modi government, shame shame".

This is the first time a session of the 17th Lok Sabha has been adjourned due to ruckus in the House.

Similar protests took place in the Rajya Sabha with the Congress and other opposition parties, including the DMK and the Left, shouting anti-BJP slogans.

Chairman Venkaiah Naidu refused the opposition demand to set aside scheduled business to discuss the Maharashtra issue. He further said that any debate on Governor Bhagat Singh Koshyari's action or the early morning revocation of President's Rule in the state could only happen after a motion was brought to that effect. No such motion has been moved, he said.

Bypassing the protests, the Chairman allowed Union Minister Mukhtar Abbas Naqvi to raise a point of order. Mr Naqvi alleged the Congress and other opposition parties were trying to "hijack" democracy in Maharashtra through "jugad".

Chaos broke out in Maharashtra on Saturday morning after NCP leader Ajit Pawar appeared to break ranks with his uncle, party chief Sharad Pawar, and join the BJP in its audacious bid to form the government.

The move, coming hours after a tripartite meeting between the Shiv Sena, the Congress and the NCP, which was attended by Ajit Pawar, appeared inches away from forming the new government in Maharashtra, stunned the three parties, who moved the Supreme Court on Sunday.

In today's hearing the BJP-led government in the state said it had the support of all 54 NCP MLAs; this, in addition to 105 of its own MLAs and some independents, will push it past the 145-seat majority mark in the Assembly. The NCP countered by claiming that 51 of those 54 MLAs would back a Sena-Congress-NCP front.

The BJP needs around 40 MLAs to reach that majority mark, prompting allegations of horse trading from the Shiv Sena, the Congress and the NCP.